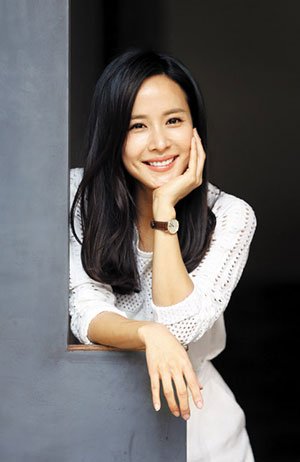 Since making her debut nearly 20 years ago, actress Cho Yeo-jeong has developed a cute, cheerful and loveable on-screen image. She added a seductive, sexy note to this range of charms with her appearance in films such as "The Concubine" and "The Servant".

In the KBS2 drama "The Perfect Wife", which concluded its run last week, Cho Yeo-jeong added another feather to her acting cap, playing the frightening, antagonist role of a woman whose mad obsession with a man leads her down a path of violence. While outwardly appearing to be the perfect wife who maintains a meticulously perfect home, she is in fact prone to psychopathic behavior as a result of childhood abuse inflicted by her parents.

"The Perfect Wife" initially gained attention as a vehicle for star Ko So-young's return to TV after 10 years. While the show's viewer ratings were disappointing, Cho Yeo-jeong's turn as the obsessive woman didn't go unnoticed, garnering much praise. "It was such a great honor to act along with Ko, who was the biggest star on TV when I was growing up", Cho Yeo-jeong said.

"To be honest, I didn't know the character would be this weird when I accepted the role", she said. "I'm actually quite laid back. I rarely get obsessed about things, I'm not the jealous type, and I don't regret much. So this role intrigued me a lot, and I was eager to take on the challenge of playing someone who is so completely different from myself".

"There weren't many examples that I could turn to as a reference, as my character was very much a social outlier. So I just reminded myself of all the bad people I've met in my life".

These days, it's not uncommon for the antagonist to grab more attention than the hero of a story. Some even say that if you want to be a star, you need to play a "Bad Guy". "It's probably because people get a vicarious thrill watching the antagonist do all the bad things that they aren't allowed to do", Cho Yeo-jeong said.

But does playing such an intense character make it harder to choose her next project? Cho Yeo-jeong said she doesn't worry about such things. "People around me were concerned when I once made a film that required a lot of nudity, but I wasn't bothered by it at all. As long as I remain true to my roles and commit to them with all my heart, then I think everything will be okay".