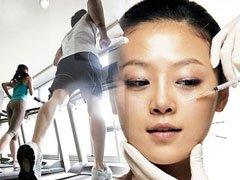 Jobseekers spend more money on improving their looks than on acquiring qualifications or mastering languages, a straw poll suggests.

Jobseekers spent an average of W240,000 on lectures and consulting sessions to prepare resumes and W560,000 on classes to prepare for job interviews.

The most common qualifications were related to jobseekers' university majors (preferred by 58.3 percent) followed by clerical skills (40.1 percent) and IT skills (36.5 percent).

The most popular language-related courses were English proficiency tests like the TOEIC (87.6 percent), followed by English conversation tests like OPIc (46 percent) and writing certificates (15.9 percent).

Seven out of 10 jobseekers said the cost of preparing for job interviews weighs heavily.

One in four had to turn to their parents for the entire cost of preparing for job interviews, while the remaining three earned the money themselves through part-time work.