Joomong: King of the Chinese Language expected to become a global content 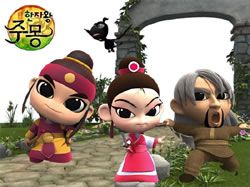 This year's top-rating drama, with an over 50% rating in the first half of the current year, "Jumong" has been made into the animation Joomong: King of Chinese Language for the Korean viewers.

MBC announced on its Web site that the animation, which consists of 26 episodes, would be broadcast beginning on December 3, at 4:30 p.m. every Monday.

Based on Joomong's childhood, this animation does not simply mimic the popular drama but creates a new edutainment style called "fun edutainment", which enables its viewers, especially children, to learn Chinese characters naturally while watching it.

Prince Joomong is a troublemaker who has little interest in studying and wants to spend all his time hunting animals. One day, he meets a crazy and mysterious old man, Haemosu, who was requested by his (Joomong's) mother, Yuhwa, to teach him. Following Haemosu's teachings, Joomong forms a vision: that of fighting a large empire in the Han Dynasty, which was rapidly growing on his land. To accomplish this, Joomong learns Chinese and martial arts. He then goes on to found a new country.

The animation weaves into this storyline, as naturally as possible, instructions on the Chinese language, particularly up to the 6th to 8th grades of the government-run Chinese Test as well as the Elementary School Chinese Language designated by the Ministry of Education in Japan. Thus, while watching the animation series, children can learn Chinese easily. The animation also features many Chinese forms of expression or preoccupations that can be used or carried out in various situations, such as martial arts (Shingigumbeom), breaking codes, and finding treasures with the use of maps. All the Chinese characters that appear on the animation have been approved by Samsung Publishing Co.

Characters like So Seo No, Dae So, and Yeong Po, and other familiar characters, make the animation's stories richer. Vivid 3D effects breathe life into each character, and fitting music by major Korean entertainers completes the whole animation package. Ginu of Rollercoaster, of Habit and Cheer Up, Mr. Kim fame, is the animation's Executive Musical Director, and Hyun, Jin-Yeong, and May of the new mixed-member group Heart Star also took part in the production of the music.

Ahead of Joomong's premiere in Korea, negotiations regarding its sale have already been under way in Japan, Taiwan, the Philippines, the Czech Republic, and Hungary. It is thus expected to become a global content in the near future. "We are expecting to reap KRW1 billion from the animation in Japan, to which we have already sold Joomong", said an official of MBC. "We are also currently negotiating with Taiwan, the Philippines, Malaysia, Singapore, India, and Iran".

The six-episode pilot version of Joomong was broadcast in Korea last April. Since then, the animation has become immensely popular among children. It has also been released in DVD format for educational purposes.

"Joomong: King of the Chinese Language expected to become a global content"
by HanCinema is licensed under a Creative Commons Attribution-Share Alike 3.0 Unported License.
Based on a work from this source