JTBC and tvN second round, "Ms. Temper and Nam Jung-gi" VS "Memory" 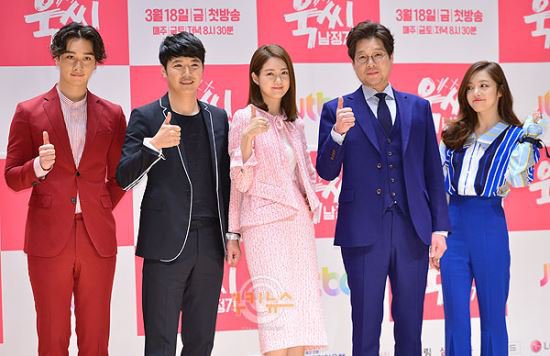 The second battle between JTBC and tvN has started. New dramas "Ms. Temper and Nam Jung-gi" and "Memory" are about to start this Friday and Saturday. While JTBC won the first battle, will it be able to win again this time?

"Ms. Temper and Nam Jung-gi" depicts the struggles of those who live in a world where the rich have all the power. Amongst them are bad tempered Ok Da-jeong (Lee Yo-won) and timid (Nam Jung-gi).

This is Lee Yo-won's first drama in 3 years with lead male Yoon Sang-hyun who has the ticket to success and Director Lee Hyeong-min is responsible for many successful dramas in the past.

Director Lee Hyeong-min said, "A good scenario and good cast made the environment an enjoyable one. I've always wanted to do comedy, but I didn't have the opportunity until now. I laughed a lot and I didn't know I had it in me".

Regarding the competition with tVN, he said, ""Memory" is directed by a close friend of mine. I wish the viewers would watch both our dramas first. Then you'll continue watching".

Yoon Sang-hyun showed pride in "Ms. Temper and Nam Jung-gi". "This is one of the most fun dramas I've ever been in. "My Wife is a Superwoman", "Secret Garden" and "I Hear Your Voice" all started off with low numbers but ended up with good results. We won't be intimidated by tvN or the ground-wave dramas".

Hwang Chan-sung said, "I am in competition with Lee Junho who is starring in the tvN drama "Memory"". He was asked who he thought was going to win but he answered, "I like JTBC more than tvN. I was upset about Lee Junho talking only about his drama when we're back at the office but my drama is going to win".

"JTBC and tvN second round, "Ms. Temper and Nam Jung-gi" VS "Memory""
by HanCinema is licensed under a Creative Commons Attribution-Share Alike 3.0 Unported License.
Based on a work from this source