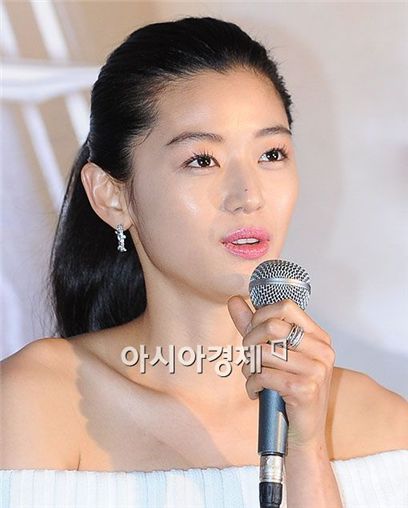 "Jeon is currently in talks to appear in a movie titled 'Falling in Love'," an official from her agency J&Co. Entertainment told Sports Today over the phone on Thursday, adding that the actress is looking at her role in a positive light but nothing has been confirmed as of yet with many adjustments having to be made.

"Falling in Love" is about a married woman falling for a manager of a club even though she finds out he approached her for her money and the man too gradually develops actual feelings of love for the woman.

"Falling in Love" claimed the Kodak Award during this year's Pusan Promotion Plan of the annual Pusan International Film Festival, winning it funds for production from Kodak Korea Limited.

Jun Ji-hyun, whose English name is Gianna Jeon, rose to stardom after her role in the 2001 hit movie "My Sassy Girl". She made her international film debut last year in the action flick "Blood: The Last Vampire" and "Snow Flower and the Secret Fan".

Jeon parted ways with her management agency Sidus HQ after 14 years to establish her own agency J&Co. Entertainment in mid-October.

"Jun Ji-hyun considering new movie role "
by HanCinema is licensed under a Creative Commons Attribution-Share Alike 3.0 Unported License.
Based on a work from this source