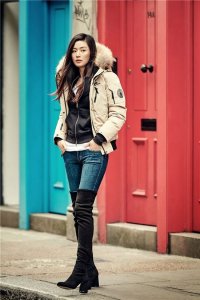 The shooting of "Blood: The Last Vampire", directed by Ronny Yu, has begun in Buenos Aires, Argentina, on Thursday, signaling the formal Hollywood debut of Jun Ji-hyun, one of the most widely known Korean Wave stars.

The film, a remake of a Japanese animation with the same title, is expected to be released in 2008.

Jeon's management agency Sidus HQ in Seoul also announced that her English name will be "Gianna Jun" in a bid to increase her public recognition in English-speaking countries, and in Hollywood.

Sidus HQ said Gianna Jun will be used in the United States and other English-speaking countries, while in Asia she will continue to be known as Jun Ji-hyun, reflecting her popularity since the huge success of "My Sassy Girl".

Jeon will play Saya in "Blood", a student who slashes vampires at the Yokota Air Base in Tokyo, just before Halloween. Allison Miller ("CSI: NY") also has a lead role in the film.

"Jun Ji-hyun joins shooting for 'Blood'"
by HanCinema is licensed under a Creative Commons Attribution-Share Alike 3.0 Unported License.
Based on a work from this source