Jun Ji-hyun to Wed Early Due to Filming Schedule 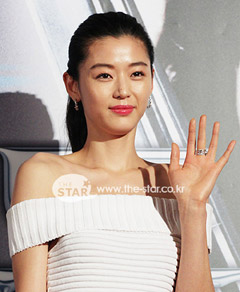 It added, "Marriage is one of the most important events in a person's life. But an actor must be responsible for the project that they embark on. Jeon doesn't want to complicate the filming schedule because of her wedding".

The news puzzled fans and many others since earlier reports said that she would walk down the aisle after shooting wrapped up in June.

Jeon's fiancé, the grandson of renowned hanbok designer Lee Young-hee, works at a Korean branch of an American bank.

"Jun Ji-hyun to Wed Early Due to Filming Schedule"
by HanCinema is licensed under a Creative Commons Attribution-Share Alike 3.0 Unported License.
Based on a work from this source