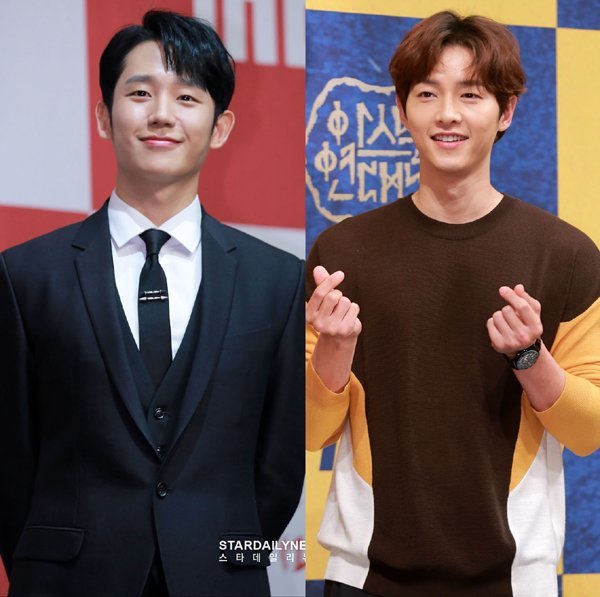 Jung Hae-in and Song Joong-ki, who have made it to the next step of becoming Hallyu stars, are back with new dramas.

Jung Hae-in started first on the 22nd of May with a new Wednesday / Thursday drama called "One Spring Night" and Song Joong-ki came after on the 1st of June with "Arthdal Chronicles", in which he underwent a massive transformation.

Jung Hae-in chose what he is good at and Song Joong-ki took on a challenge with something new, but they have yet to shake off the image of their previous, strong works.

Jung Hae-in chose a character that seems to connect with his previous work and something that he is good at. In "One Spring Night", he plays 35 year-old pharmacist Yoo Ji-ho, a single father to a young son.

Amidst a sense of loss and resignation, he meets love and all his emotions wake up. His co-star, Han Ji-min, and Jung Hae-in begin a love that not many would approve, foreseeing much pain and trials.

Some say that Jung Hae-in's characters in "One Spring Night" and "Pretty Sister Who Buys Me Food" overlap, just with different partners. Jung Hae-in stressed that his characters were different at the premiere of the drama, but they have yet to be recognized by audiences as such.

Sources say that Jung Hae-in choosing a character that best suits him and building a specialized image would be good, since he has the ability to show various aspects, and can be recognized by the public for his solid acting skills.

Song Joong-ki plays Eun-seom, a character who struggles against a great civilization to save those Wahan Tribe who live with the Igutu, born between human and Neanthals in "Arthdal Chronicles".

The drama itself is based on an ancient land and it's about the fates of heroes who write out different legends. Song Joong-ki has accepted the challenge of creating an unexisting character in this new and striking drama. He succeeded visually with his flawless body shape and unique hairstyle, but some say he resembles his character from "Descendants of the Sun" as he bumps into Kim Ji-won who plays Tanya.

Sources say, "It will be tough to shake away the image from "Descendants of the Sun", as it was such a domestically and globally influential drama. But Song Joong-ki's performance is going to capture the attention of viewers eventually".

It is a common opinion that the last two episodes of "Arthdal Chronicles" were impressive with Song Joong-ki's manly and lovely appearance.

"Jung Hae-in and Song Joong-ki, Difficulty in Shaking Off Previous Works"
by HanCinema is licensed under a Creative Commons Attribution-Share Alike 3.0 Unported License.
Based on a work from this source