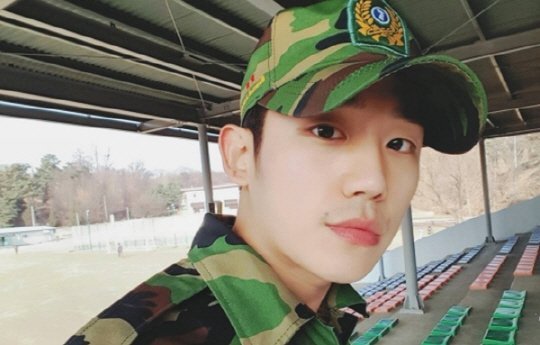 Jung Hae-in is starring in the SBS drama "While You Were Sleeping - 2017" as Han Woo-tak who avoided death thanks to Jeong Jae-chan (Lee Jong-suk) who had a premonition.

Han Woo-tak seems like the bad guy, but it turns out he used to be a good guy who has premonition like Nam Hong-joo (Suzy).

On the episode of "While You Were Sleeping - 2017" on the 18th, Han Woo-tak kept a crucial secret that surprised everyone.

Meanwhile, Jung Hae-in said he was approached by his management when he was in 11th grade to be an actor.

"I had about a month's free time after my college entrance exams and I passed the test for theater and film. I was really lucky".

Jung Hae-in said, "I want to take it a step at a time and although I started late, I want to see myself in the long run".

"Jung Hae-in looking good in military uniform"
by HanCinema is licensed under a Creative Commons Attribution-Share Alike 3.0 Unported License.
Based on a work from this source