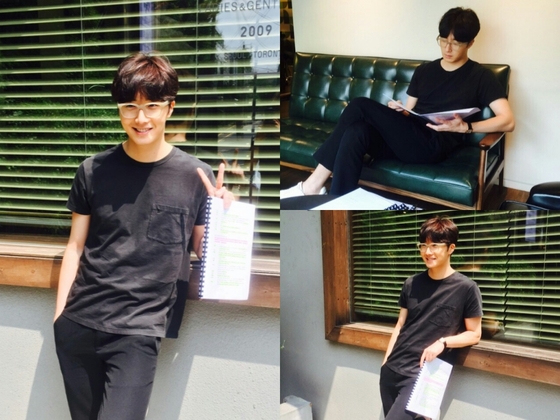 On July 15th, a script reading session for 'The Greatest One-Sided Love No One Has Ever Seen Before' (working title) took place at Kim Jong-hak Productions near Hongik University in Seoul.

Jung Il-woo was spotted on his way to the script reading for the Korea-China Joint webdrama project, produced by Kim Jong-hak Productions ("Splendid Politics", "Masked Prosecutor") and the Chinese portal site Sohu.com.

Jung Il-woo will play the lead role, Choi Se-hoon, CEO of a large entertainment management company in Korea. His role, Choi Se-hoon is called 'Hand of Midas' for his expert ability to make anyone in his hands A-list stars. He is anticipated to capture women fans' hearts both in Korea and China with the haughty, cold demeanor and the face, ability and social status of his perfect guy role.

In the revealed photos, Jung Il-woo looks chic in the comfortable style with a pair of black pants and a matching shirt. You can feel the excitement and anticipation from his efforts to study the script in detail.

Jung Il-woo said "I'm happy to be able to work with this great project. I'm excited as it will be a pleasant experience. I'll prepare harder to deliver something new that you haven't seen from me yet. I'd like to ask for much support and love".

'The Greatest One-Sided Love No One Has Ever Seen Before' (working title) is a romantic comedy depicting the heartfelt and pure love story by a man with everything in his hands, who falls in love for the first time in his life with a woman, who has been living in completely opposite circumstances from his. It will premiere in September in Korea and China.