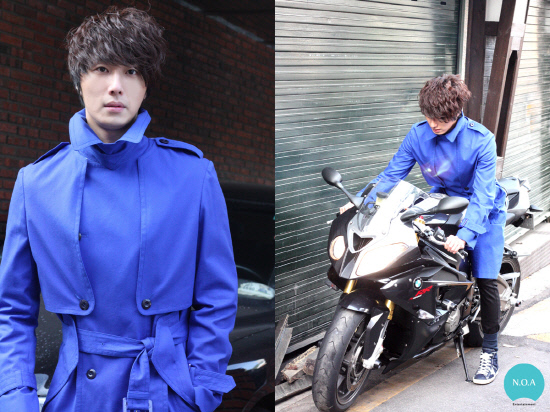 In the new SBS drama "49 Days" he is a 'scheduler', an angel of death. Instead of the usual dark image, he wears a fancy blue trench coat and rides a motorbike.

His stylist says, "The character he has in this drama was a non existing one so far. To create a new image to the words 'angel of death' he is focusing hard on not only acting but his visual as well. He wears more bright colors than the usual dark colors worn by other angels of death".

Those netizen's who have seen the images through promotion materials, they say, "A blue trench coat! Not everyone can make it work but it looks good!", "I thought this was a photo shoot not a drama shoot", "I am looking forward to his fashion in the drama "49 Days"".

"Jung Il-woo, Trench coat + Motorbike 'new concept Angel of death'"
by HanCinema is licensed under a Creative Commons Attribution-Share Alike 3.0 Unported License.
Based on a work from this source