Jung Joon-ho: 'I Have Never been Aflutter Like This' 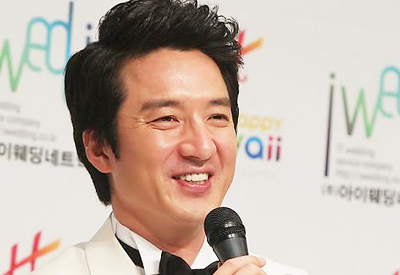 Actor Jung Joon-ho (41), who was the representative old bachelor actor, said, "I have never been aflutter and nervous like this for about forty years of my life. I think that I have had a very comfortable life until now". He held a press conference before his wedding ceremony on March 25 and expressed his feelings, saying, "I have participated in many events and preview parties, but I have never felt tense like this before. I think that marriage makes me aflutter and tremble with excitement right on the threshold of a new life". He continued, "I had a restless night yesterday until 3 am and I thought that being a husband of one woman and head of a family is not something easy. I just looked at the window vacantly thinking that a life of Jung Joon-ho as an individual has to beended by getting married. I was wondering whether any married man had felt like this and I called Tak Jae-hoon to ask him whether he had the same feelings and he answered that every man had the same feelings. He even told me that having that kind of feeling was the beginning of a life as a married man". 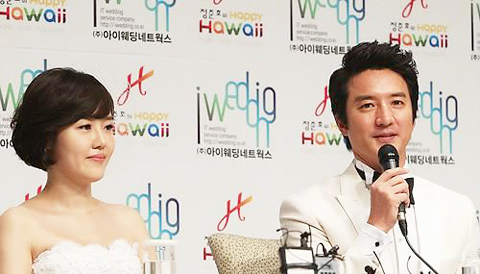 Jung Joon-ho met the anchorwoman Lee Ha-jeong last November while he had an interview and they have seen each other since then. Lee Ha-jeong looked back on the day when she met him first and when she felt really tired from her work. She said, "I have had a good feeling about him, but at that time, I was taking a rest at home after finishing night duty and I had to go out again to have an interview with him, so I was really tired when I saw him first. I have never thought that I could see someone in the entertainment business, so I just led the interview as an anchorwoman naturally. I think that the comfortable atmosphere during the interview might let us see each other after that". Jung Joon-ho revealed, "I heard from a writer of the program later that she reportedly grumbled, saying, 'Why do I have to interview him even though he is not an idol star'," and he laughed. He added, "I gave very detailed answers during the interview and I guess that Lee Ha-jeong might come to think that I was an attentive man from my answers. In addition, the writer of the program told us that we looked like a good couple. After finishing the interview, I asked for Lee's contact number while saying that I would like to treat all the staff members, and we could see again few days later".

Jung Joon-ho revealed, "My future mother-in-law liked me, so we could make a decision about our marriage very quickly. As far as I heard, my mother-in-law usually told Lee Ha-jeong whenever she saw me on TV that Lee had to get married to someone like me. We had a date while I was filming a drama, so we had to see each other for only a moment at around 1 am or 2 am after my filming schedule had finished. Usually women say 'It is too late for going out' for someone asking them to come out at 1 am or 2 am in the morning, but she simply answered, 'Ok, I will go out'. I asked her whether her parents said anything bad about her going out late at night, and she told me that her mother actually allowed her go out early and come home late (laugh). Thanks to my mother-in-law, who has been very supportive about our dates, I could propose to her in only a month". 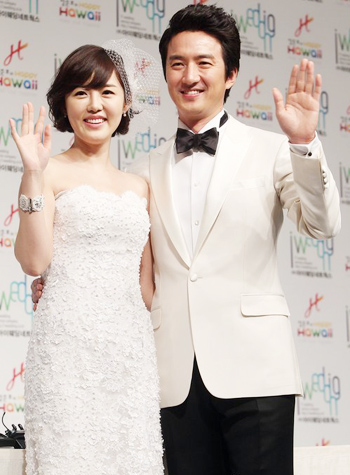 Asked about their family plan, Jung Joon-ho answered, "I just want to form my family naturally. Lee Ha-jeong is thinking about having three children, and I also think that I need at least three kids for giving my works to them evenly". He revealed his aspect as an attentive husband by saying, "I want to go travel with her and offer her very delicious food made by myself along with a glass of wine at our wedding anniversary". Lee Ha-jeong said, "I will become a wise wife to him not to give any harm for his life that he had lived so far". In addition, Jung Joon-ho delivered his consolation for earthquake victims in Japan, saying, "I am so sorry that I can share my happiness with my fans in Japan. As I heard that people in Japan are suffering from water shortage, I am thinking about sending water to them".

Jung Joon-ho and Lee Ha-jeong held their wedding at Sheraton Walkerhill Hotel at 6:30 pm on March 25 and went on a honeymoon to Hawaii. His best friends Shin Hyun-joon and Tak Jae-hoon hosted the wedding ceremony, the president of the World Taekwondo Federation Cho Jeong Won officiated, and singer Roh Sa Yeon and members of "Ddasamo", which is a voluntary group consisting of entertainers, sang for the wedding.