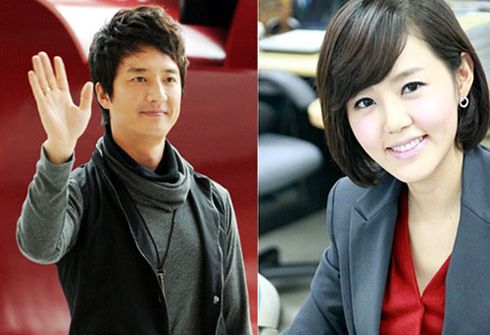 Jung Joon-ho is dating MBC presenter Lee Ha-jeong, it has been revealed after weeks of speculation. Responding to rumors that he is in love, the 41-uear-old actor released a statement last month through his agency saying saying, "I have a girlfriend, but I can't see her very often because of my busy schedule. I cannot reveal who she is".

Speculation that the mystery woman also works in the entertainment industry caused Lee (32) to confirm in a telephone interview with MBC's "Section TV Entertainment News" that she is seeing Jeong.

A member of the show's production team told the Sports Chosun on Sunday, "Lee cautiously confessed to her relationship with Jeong".

In his acceptance speech after winning a prize in the 2010 MBC Drama Awards on Dec. 30, Jeong said, "I think I may have good news in the new year", implying that he is preparing for a wedding.

Lee has a master's degree in political science from Yonsei University. She was picked as an MBC presenter in 2005, pipping 1,200 competitors to the post. She currently is newscaster for the "Six O'clock News Magazine".