Jung Joon-ho, "Marriage, Trying not to pass this year" 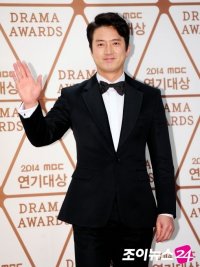 He revealed this on the 28th at the closing party for MBC "Last Scandal".

He said, "I am at the age to get married. So if I do get married, I don't want to hide it. But I was confused when an unexpected article came out. I don't think it's respectful to fans either".

"It is true that I have good intentions, and I will try to see good results. To be honest, it'll be hard if this year passes. So I'm trying hard to make it work".

Jung Woong-in, who also starred in "Last Scandal", joked, "It was Sunday and Jung Joon-ho was on the phone while filming. But it was a woman's voice". I heard, 'Let's eat together'. So I was suspicious. Jung Joon-ho has to hurry and get married. We have to get rid of him".

"Jung Joon-ho, "Marriage, Trying not to pass this year""
by HanCinema is licensed under a Creative Commons Attribution-Share Alike 3.0 Unported License.
Based on a work from this source