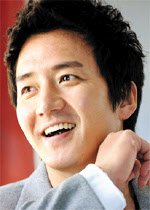 Actor Jung Joon-ho has filed a lawsuit against a wedding hall operator over unpaid modeling fees.

Jeong's agency said it filed a lawsuit against an individual identified only by his surname Han who runs a wedding business in Asan, South Chungcheong Province, seeking W400 million (US$1=W1,115) in compensation.

Jeong claims that Han owes him the money for modeling in adverts for his business hall for more than a year starting in 2011.

The amount is calculated based on the amount Jeong normally charges for a year for modeling.

However, Han claims that Jeong wanted to go into business with him and that he had paid the actor W100 million in modeling fees. "It is absurd for his management company to demand W400 million now", Han said.