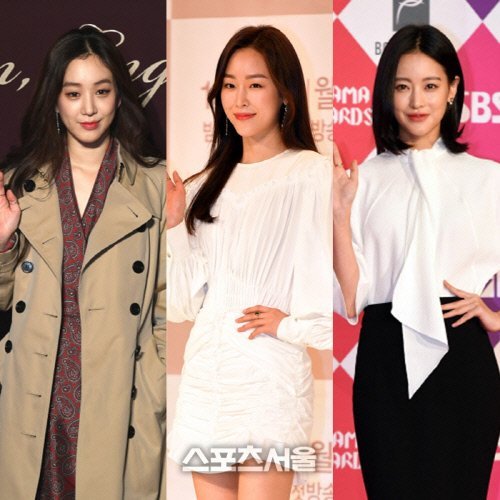 Acting idols are coming out with dramas.

The term 'acting idols' is no longer awkward, as various idol group members turn to acting. Role models or 'good examples' of acting idols are coming out with dramas; Jung Ryeo-won from Shakra, Seo Hyun-jin from M.I.L.K and Oh Yeon-seo from LUV. These actresses who were singers back in the late 1990s and early 2000s are being re-highlighted online, and many are even surprised to find out they were idols. These actresses have settled down as proper actors with their fitting characters and performances, and they are all coming out with new dramas.

Oh Yeon-seo starts first. She's starring in the upcoming MBC drama "Love With Flaws". This romantic comedy drama is about a woman who hates pretty boys and a man who is obsessed with looks meeting each other and overcoming their misunderstandings. Oh Yeon-seo appears as physical education teacher Joo Seo-yeon.

The drama was put in the spotlight from the beginning because of Ahn Jae-hyun, Oh Yeon-seo's co-star who has recently been going through divorce proceedings. The pressure is on Oh Yeon-seo, as she literally has to carry the drama. However, her experience in "My Husband Got a Family", "Jang Bo-ri Is Here!", "Shine or Go Crazy" and "Please Come Back, Mister" made her suitable for this romantic comedy.

Jung Ryeo-won and Seo Hyun-jin are starting new dramas on the same day. Jung Ryeo-won stars in the jTBC drama "Diary of a Prosecutor" while Seo Hyun-jin stars in the tvN drama "Black Dog", which begin at 9PM on the 16th of December. The two actresses put on the best of their performances in familiar dramas with different subjects.

"Diary of a Prosecutor" is not the story of the fancy lawmakers we see through media, but the story of the average prosecutors in the urban areas. Unlike typical prosecutor lead characters, the difference is that it tells the story of prosecutors trying to bring ordinary justice. Jung Ryeo-won plays elite prosecutor Cha Myeong-joo. It was said that she played her life's defining character as Ma Yi-deum in the KBS 2TV drama "Witch's Court". She was so good in her role as the prosecutor, and she's coming back with a similar character.

Seo Hyun-jin stars in "Black Dog", which is based in a school. Unlike previous dramas that set students as the main characters, this will add freshness to the struggles of new term teachers. Seo Hyun-jin plays Go Ha-neul, a short-term teacher who has to struggle to survive in the school.

Seo Hyun-jin has been successful with all her roles in the dramas "Let's Eat - Season 2", "Oh Hae-Young Again", "Dr. Romantic", "The Temperature of Love" and more. Her new character is highly ancitipated, as is her synergy with Ra Mi-ran, her co-star.

"Jung Ryeo-won, Seo Hyun-jin and Oh Yeon-seo, The Big Match of Singer Turned Actresses"
by HanCinema is licensed under a Creative Commons Attribution-Share Alike 3.0 Unported License.
Based on a work from this source