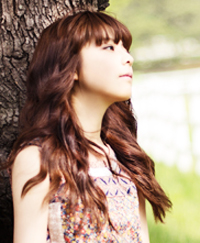 The up-and-coming singer released the single Tuesday, along with a music video, performing with Jung Yong-hwa from Korean rock band CNBLUE, who wrote and composed the song.

The video features the two singers composing and strumming guitars together on a road trip.

In 2010, the 19-year-old singer won "Niji-Iro Supersnova", the Japanese version of Korean audition program "Super Star K". She then started her career in Japan in 2011, releasing an EP called "Ready Go", demonstrating her talent as a singer-songwriter. The solo artist is with the same agency as CNBLUE.

Starting Tuesday, netizens have been invited to leave encouraging messages on her official website. Forty of them will be randomly picked and invited to a showcase on June 7 where Juniel and Jung will sing live together for the first time.

"Juniel's debut single 'Stupid' ranks second in Korea"
by HanCinema is licensed under a Creative Commons Attribution-Share Alike 3.0 Unported License.
Based on a work from this source