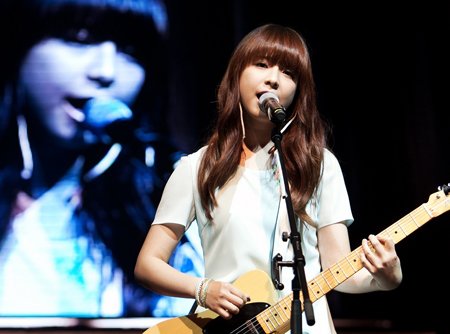 Can a teen girl rocker make a dent on the music scene dominated by dance pop troupes? Nineteen-year-old Juniel thinks so.

"I have my own identity, my own style, my own voice", she told a room full of reporters at her debut showcase Thursday in Seoul. "I don't' have to compete with girl groups".

The performance of her first single "Illa Illa" made that point clear. She was almost screaming into the microphone, showing off her vocal pipes, as her band backed her up. The sound was reminiscent of earlier Alanis Morissette than IU, the cutesy local pop princess to whom Juniel's physical resemblance has drawn comparisons.

This was all the more surprising since the song's subject was rather innocuous, even downright girly: "It is about the feelings a girl experiences when she falls in love for the first time", she explained. During her interview, she looked more her age, speaking carefully with a tinge of timidity.

Her agency FNC Entertainment has trained her in Japan for two years, like her label mates FT Island and CNBLUE. Starting from smallish stages in underground bars, Juniel surprised even her management by winning the Niji Iro Supernova in 2010, the Japanese equivalent of "American Idol", beating singer-songwriters from all over the country. She was even called the next Hikaru Utada, one of the bestselling Japanese recording artists of all time.

"There is more weight on my shoulders (after the victory), but it's like a little nudge that helps me work harder".

Jung Yong-hwa, the vocalist and songwriter of CNBLUE, joined her on the stage to perform a track he co-wrote, "Stupid", whose music video has amassed more than a million hits on YouTube. She also sang her first Japanese single "Ready Go", as label mates Lee Jung-shin and Lee Jong-hyun of CNBLUE and FT Island's Choi Jong-hoon cheered her on.

Juniel makes her first run through the television showcase circuit this weekend, starting with MNet's M!Countdown Thursday and wrapping up Sunday on SBS's Popular Music show.

"Juniel tries to make girl rock mark on K-pop scene"
by HanCinema is licensed under a Creative Commons Attribution-Share Alike 3.0 Unported License.
Based on a work from this source