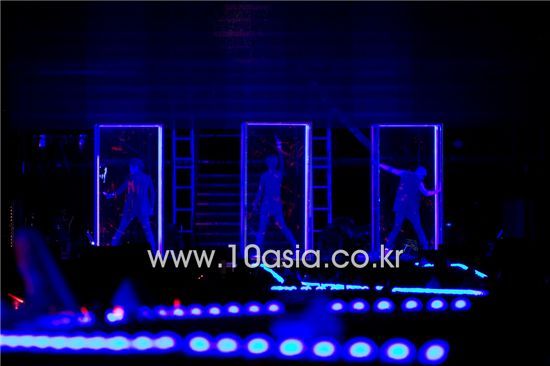 Boy band JYJ performs at the group's first concert titled "JYJ Concert in Seoul" at the Main Stadium of the Olympic Park in Jamsil of Seoul, South Korea on November 27, 2010. [Chae Ki-won/10Asia]

"Getting struck by wind is said to happen only to those who are flying. I believe that the many winds that we are being struck with are blessings in disguise, meaning that we will fly high up". That is what JYJ member Junsu during their two-day concert titled "JYJ Worldwide Concert in Seoul" held on November 27 and 28 at the Main Olympic Stadium in Jamsil. And the 'wind' he spoke of did not refer to the hail and strong wind that took down the large tent that was installed over the roof of the stadium ahead of the first day of the concert. Former TVXQ members Jaejung (Kim Jae-joong), Park Yoo-chun and Junsu left the band after filing a lawsuit against SM Entertainment last summer asking their exclusive contract with the agency to be nullified after which SM filed for injunction on the three's release of their worldwide album "The Beginning" in October although they later withdrew it. While the lawsuit regarding the contract with SM is ongoing, TVXQ's two remaining members Yunho Yunho and Changmin Lee Changmin are set to resume their singing careers next year under the name of TVXQ.

Despite all the ups and downs they have been through, JYJ delayed the starting time of 7 p.m. for their concert on November 27 by an hour since they had to take down the tent and the 35,000 local and international fans had to endure the below-zero temperature. However, the stage was enough to show off the elaborate dance moves and singing skills of the JYJ members whose performances were of tracks from their album "The Beginning" which features works from world-renowned musicians such as Kanye West who composed "Ayyy girl", Rodney Jenkins who produced "Empty", as well as unreleased songs "9", "Fallen Leaves" and "Mission Make It". Each member gave solo performances as well, with Park Yoo-chun taking the stage to give his rendition of "Drunken Truth" by duo Exhibition, Junsu performing with a string orchestra for "I Can Soar" and Jaejung (Kim Jae-joong) singing "To You Its Goodbye" from the soundtrack to KBS' drama "Sungkyunkwan Scandal". The dance performance, which was directed by Jeri Slaughter who has worked with top global artists Mariah Carey and Christina Aguilera, left a deep impression with its extravagant lights and dynamics moves which was reminiscent of Cirque du Soleil's shows. They also successfully delivered a relatively clear and rich sound even though they were limited in terms of location with the concert being held in a stadium -- faults were pointed out regarding the sound during their showcase held at Korea University's Hwaseong Tiger Dome last month. However, it could not be helped that there was a limit to them conveying the emotions felt in the songs from their album "The Beginning" which is in English and it was inevitable that their new songs, unveiled for the first time at the concert, created an awkward atmosphere.

But of course these inconveniences came about also because JYJ is a team that is just 'beginning'. The lyrics to their new song "Pierrot" which say, "I have my own thoughts and my own life. I don't want to remember those times which seemed like prison. Forever bye bye bye", seemed to be directed towards their previous agency as well as saying goodbye to their past as TVXQ. It may also refer to how they cannot and will not sing the songs that they sang as TVXQ and how they are singers will their first full-length album even though they made a debut seven years ago. Hence, after going through trial and error, they showed quick improvement on their show on November 28 compared to the previous day, drawing reaction from the audience on the second and third floor from warmer weather, better arrangement of the floor seats and usage of a subsidiary stage. In that sense, the most important thing that the members of JYJ may need is time to build up a repertoire that is right for them.

"JYJ holds concert in Seoul over weekend "
by HanCinema is licensed under a Creative Commons Attribution-Share Alike 3.0 Unported License.
Based on a work from this source