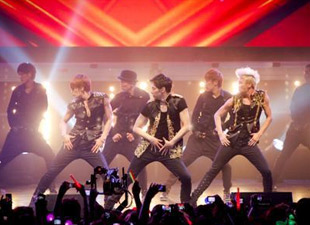 JYJ had a busy start to 2012. The guys just wrapped up their world tour, including a performance in Peru for 6,000 fans. All in all, the tour consisted of stops in 15 difference cities for a total audience of 210,000 people. 12 of their 15 stops were sold-out shows.

With their tour behind them, the members will now shift their focus to solo activities. JYJ's agency CEO Baek Chang-joo stated that the group will focus on their individual activities until the second half of this year, which is when they will release their second official English album. He added that with their popularity, he's even looking forward to another world tour next year.

"JYJ To Focus On Solo Activities & Release 2nd English Album"
by HanCinema is licensed under a Creative Commons Attribution-Share Alike 3.0 Unported License.
Based on a work from this source