JYP on Defensive Over Tzuyu Twitterstorm 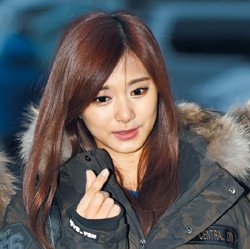 The Twitterstorm involving Tzuyu, the Taiwan-born member of manufactured girl group TWICE, continues to escalate in Korea, China and Taiwan.

The fracas erupted when Tzuyu, who is all of 16 years old, was seen in a webcast waving the Taiwanese flag and was promptly made to apologize by JYP, the talent mill that runs the band, which only made matters worse.

Tzuyu was born in Tainan City in southwestern Taiwan and came to Seoul at the age of 13 after being scouted by JYP Entertainment and put into the company's training program.

She went through the grueling training regime for two years before debuting after winning one of a slew of audition shows on cable channel Mnet.

News of Tzuyu competing on the program spread to Taiwan, resulting in many in the island nation taking part in the phone vote. That helped Tzuyu become one of the winners, who formed the nine-member multinational group TWICE designed to appeal to the pan-Asia market for K-pop.

She also became the cover girl for telecom LG Uplus, a response to a successful campaign by rival SK Telecom which featured Seolhyun of girl band AOA. Tzuyu's popularity surged even though TWICE's musical output has so far been slim, and she became a sought-after guest on TV shows.

In November, Tzuyu appeared in the webcast in question alongside the band's three Japanese members. All four waved their home country's flag, but the footage was edited out of a TV version of the broadcast and did not cause much of a stir.

It was only two months later that a Taiwanese media outlet found the complete footage on the Internet and hailed the teenager as a patriot.

This in turn drew the ire of a pro-Beijing Taiwanese singer, who caused the clip to go viral. 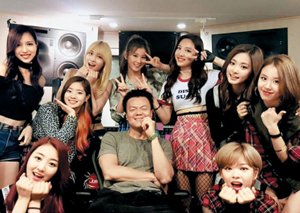 Tzuyu (back row, second from right) and other members of girl group TWICE pose with producer Park Jin-young in this photo from the group's Instagram account.

Park Jin-young, the head of JYP, tried to diffuse the problem by saying Tzuyu's flag-waving was not a political statement. One eye firmly on the lucrative mainland Chinese market, the company paraded the girl before the cameras apologizing and declaring herself proudly Chinese, but by then the damage was done.

JYP in a statement on Monday claimed it "discussed" the prospect of Tzuyu's apology with her parents since she is still a minor, and insisted it did not coerce her to apologize. She was also left off the roster of a planned appearance in mainland China.

Taiwanese media reported that Tzuyu's mother hoped the apology would settle the controversy and that her daughter could sing and dance again.

Paradoxically the only voice of reason appears to be the Chinese state media, which have published articles sympathetic to Tzuyu while criticizing Michael Huang, the pro-Beijing singer who escalated the fracas.

At one time, Chinese censors even attempted to block Internet searches of Tzuyu, clearly reluctant to let the perennial Taiwan problem bubble to the surface again.

But now footage and photos of her can be freely accessed on the Internet in China, and the music channel of state-run CCTV broadcasts videos of her performances.

Liu Xiangping at Nanjing University wrote in a Taiwanese newspaper that JYP badly misjudged the situation, perhaps because the Twitterstorm broke out just as the Taiwanese were going to the polls to elect their new leader in a contest that was fought on nationalist issues.

"JYP on Defensive Over Tzuyu Twitterstorm"
by HanCinema is licensed under a Creative Commons Attribution-Share Alike 3.0 Unported License.
Based on a work from this source