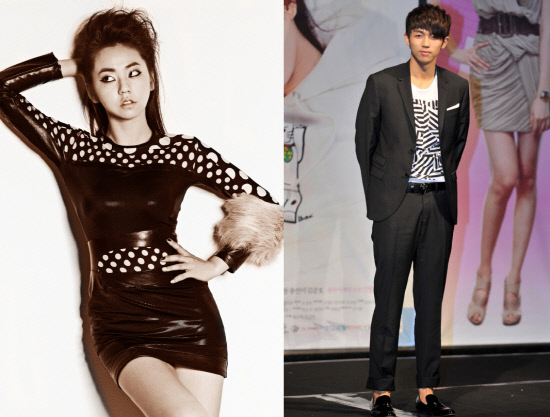 Are Ahn So-hee and Im Seulong perfect for each other ?

Ahn So-hee of the Wonder Girls!

Im Seulong of 2AM!

The two stars are on the verge of scandal!

Everyone is talking about what Im Seulong and Ahn So-hee say they're looking for in love.

Im Seulong, with his kind eyes and strong features, and Ahn So-hee, with her cute and sexy charm!

Don't you think they'd be a good match

Hyuna has been the subject of constant controversy due to her sensational performances and dance choreography.

She was forced to stop performing "Bubble Pop" because of censorship of her choreography.

She decided to come back with an even more shocking performance!

Hyuna's sexy dancing stirs up trouble, but her fans are always eager for more!

We can't wait to see what she comes up with next.

[Interview : Lee Yeon-hee, Actress] "I hope to be a part of many great projects this year as well. Thank you".

But she wasn't the only woman dressed in black! Hallyu star Choi Ji-woo also stole the spotlight in her black ensemble.

[Interview : Choi Ji-woo, Actress] "Thank you for giving me the Asia Star Award. I will repay this honor by working harder on more great projects in the future".

The Asia Model Festival Award was a spectacular night shared with 4000 fans.

Outsider debuted in 2007 after spending 8 years in the underground rap industry, and earned the nickname "speed rapper" with successful hits like "Loner" and "Acquaintance". Last week, he's announced that he will be getting married.

The news broke out on January 27th through his fan cafe.

Outsider's bride-to-be is the head of a dance company and the CEO of a culture content company.

We wish the couple the very best!

At the awards ceremony held in Tokyo on January 27th, they were awarded titles including "Best Asian Artist" and "Best 3 Albums".

Girls' Generation took home the Album of the Year and the Best 3 Album awards.

Didn't HyunA's hip moves get banned or something like that If anything it was controversial I'm glad to see that Ahn So-hee and Im Seulong are finding love together.
They make a very cute pair.
They sure do.