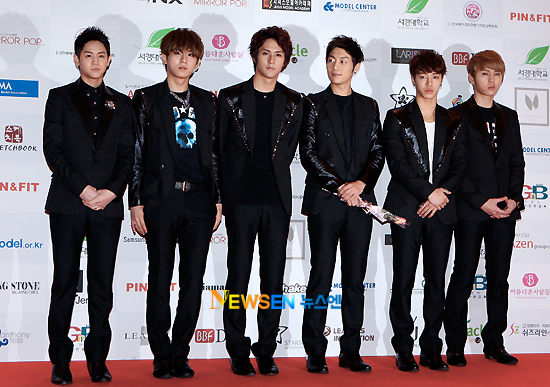 [SOV]
[Interview : Yang Yo-seop, Member of BEAST] "From now on, BEAST is going to get a bit more wild! Here we go!"

BEAST's world tour concert has drawn a lot of international fans too. Now let's find out which member has enchanted all these girls!

[ENG]
[Interview : Sarah, Fan USA] "My favorite is Yo-seop because he's so cute"

So, what is it about BEAST that appeals so much to international fans[Interview : Jacqueline, Fan
Canada ] "Their music is just different and not like other rookie groups. Over a couple of years, they've gotten up to a really high level, much better than other groups"

[Interview : Anne, Fan Taiwan ] "Because they're very nice, very cute and have the best performances"

The fans are already having the time of their lives while they wait for the concert to begin!

BEAST prove their potential as a world-class pop band last December as they held a K-pop concert in Brazil, which was the first of its kind in South America.

BEAST captivate the audience with a mix of their past hits and newly released singles. Their first world tour concert is set to be packed with stunning visual effects.

[Interview : Yang Yo-seop, Member of BEAST] "This is a truly beautiful scene, which matches our concert title "Beautiful Show". Thanks so much for filling all these seats! From now on, BEAST is going to get a bit more wild!"

BEAST has just taken the first step in their challenge to win the hearts of music-lovers around the world. Their world tour, which will cost US$18 million, is set to include 35 shows, around 21 cities in 14 countries.

Now BEAST is in full throttle in the race to become the top Hallyu singer. We wish you the best!

Be careful if you're listening and singing along to some of their songs on your ipod while walking through dark alleys.
Because I've heard stories where some guy just singing along freaked out some girls from doing that breathe in breathe out part.
Right. The girls might not mind so much in concert but out of context on a dark street that would be scary.
But in any event a lot of fans around the world will get the lucky chance to see them in concert.
Okay stay with us we'll be right back.

"K-celebrities now 2"
by HanCinema is licensed under a Creative Commons Attribution-Share Alike 3.0 Unported License.
Based on a work from this source