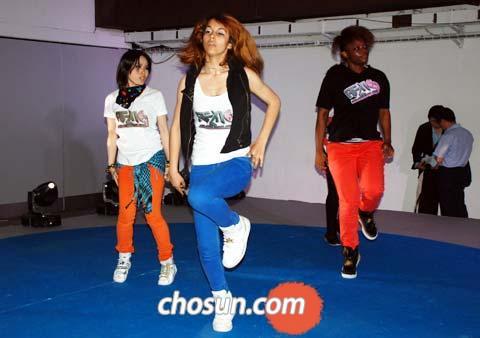 French teenagers dance to 2NE1's hit song "I don't care" during a K-pop contest at the Espace Champerret in Paris on Sunday.

The Espace Champerret in Paris' 17th arrondissement saw the unusual spectacle of hundreds of French teenagers singing and dancing to Korean pop music on Sunday afternoon. Four of them took to the stage to lip-sync to 2NE1's hit song "I don't care" during a K-pop contest held there while the audience boogied along.

At booths across the stage for Super Junior, Girls' Generation, SHINee, and f(x) fans, hundreds congregated to leave messages in Korean to the K-pop stars, who are due to visit Paris on June 10.

Sunday's event was organized by Korean Connection, a club of K-pop fans who also organised a demonstration in front of the Louvre on May 1 calling for an extra day concert by a bevy of Korean stars after the 6,000 tickets for the concert sold out in just 15 minutes online. It was an all-round Korean culture festival, featuring not only pop, but also break dance, Korean films, TV dramas, calligraphy, and Korean martial arts like taekwondo and taekkyeon.

Fans scoured the racks of Korean TV shows to see whether their favorite stars appeared in any of the soaps. A Korean food-tasting booth was also hugely popular.

Maxime Paquet of Korean Connection said, "More than 4,000 people visited our event. It shows how the popularity of K-pop is intensifying here".