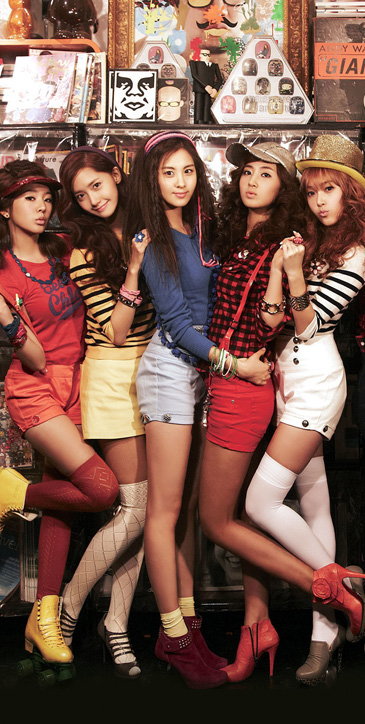 SHINee is the new Beatles of Asia. The Wonder Girls made their debut on Nickelodeon. Girls' Generation (SNSD) brought "The Boys" song to Late Night with David Letterman and Live With Kelly. 2PM became the new sexy icons in Japan. What do all these artist have in common? They have brought K-pop to the global scale.

South Korea began expanding its entertainment industry with the release of dramas like "Winter Sonata" and "Stairway to Heaven" in the early 2000s. Television stations airing these dramas began appearing all over the United States. WOCH-CA KBC-TV in Chicago aired South Korean news and dramas from the major networks KBS, MBC and SBS in its earlier days. Throughout the years, the station has transformed in a multi-ethnic network with KBC airing Arirang, MBN, Filipino and other countries programming.

Dramas are now available on DVD or many other legal websites like Viki or Dramafever. Fans get their weekly K-drama fix via the internet and South Korea's music has stepped up to the plate.

Who started the Asian invasion in the United States? The Wonder Girls. South Korea had plenty of actors in Hollywood, but the Wonder Girls introduced America to the tunes of K-pop. Korean Pop music found a voice on the 2009 Jonas Brothers Tour. The Wonder Girls joined the latter half of the Disney group's US tour and continued to make their mark in the US music industry ever since.

The Wonder Girls is now jointly managed by The Jonas Group and JYP Entertainment in the United States and they have performed countless times for overseas fans. "Nobody", "2 Different Tears" are two tracks the girls have actively promoted abroad. In February of 2011, they made their acting debut on Nickelodeon's Teen Nick movie "The Wonder Girls.

They received nominations for the Kids Choice Awards and Popstar Awards. They are now preparing for their first English studio album release.

SHINee and Girls' Generation have intrigued different parts of the world. The two SM Entertainment labelmates traveled the globe together as a part of the SMTown World Tours. They have performed in Tokyo, Bejing, Paris, New York and Los Angeles just to name a few. Boy band SHINee's appeal has hit overdrive in London, while Girls' Generation made their official debut in the United States.

After performing at Abbey Road Studios and selling out a show at a British festival last year, SHINee has been named the Asian Beatles by the press. They have captivated Great Britain with their talented vocals and impressive dance skills.

Girls' Generation worked with famed American music producer Teddy Riley and Snoop Dogg to release their very first English single "The Boys" in the fall of 2011. The girls are represented by Universal Music Group as well as SM Entertainment in the United States.

They performed on two popular American television programs (Late Night with David Letterman and Live with Kelly). In addition to their worldwide concerts and international debuts, Yoona and Tiffany are currently active as actresses. Yoona stars in "Love Rain", while Yuri is part of the "Fashion King" cast. So, K-Pop and dramas collectively bring people from all over the world to South Korean soil.

Who else makes foreigners flock to Seoul for the chance to see their favorite idol in person? They are 2PM! The 6 member boy band's popularity exploded in Japan in 2011 with their active promotions of the singles "Take Off". "I'm Your Man" and "Ultra Lover". Members Ok Taecyeon and Chansung acted in Japanese dramas at the end of 2011. Ok Taecyeon played with fellow Korean star Kim Tae-hee in "99 Days with My Star" and Chansung was apart of the main cast of " Kaito Royale". Also, 2PM recently completed a successful Asian Music Tour.

The artists mentioned above are just a few of the many K-Pop artists making an impact on music around the world.

Music labels like SM Entertainment, JYP Entertainment and Cube Entertainment are gathering their most popular performers and holding concerts across Asia, Europe, the Americas, Australia and the Arab World.

Medical Tourism is increasing among Asian fans. They consider plastic surgery to look like their favorite South Korean celebrities. Even though singers sometimes faint or dehydrate due to exhaustion, Korea's expert medical treatment rejuvenates and cures them within a short period of time. Shots and IV drips may seem extreme to foreigners, but it is the quickest and most effective way Koreans combat colds.

"We've expanded the network to all the top 10 cities in the US including San Francisco,Chicago and Boston. Also, it is really amazing to see that Mnet is now starting to gain traction as an American channel and not as imported foreign channel. We are committed to bringing programming to Mnet that reflects the diverse world of Asian pop culture. From K -Pop to anime to indy short films and beyond. Stay tuned as we have some really cool shows in development".

Noh talked about the nationalities his website Allkpop reaches online.

"From our stats, we have readers from all over the world, and all different ethnicities. I think that around 30 percent are Koreans and the rest are other ethnicities/nationalities".

He ended the interview with his idea of a Korean group who could successfully debut in the United States.

"Honestly, I think it's still a little too early, but I'd probably have to say... 2NE1 has the best shot at this point.. their style and swag I believe fits best with western culture".

"K-Pop Expands the Hallyu Wave: SHINee, Wonder Girls, SNSD, 2PM Captivate World"
by HanCinema is licensed under a Creative Commons Attribution-Share Alike 3.0 Unported License.
Based on a work from this source