K-POP Goes Beyond Asia By Internet 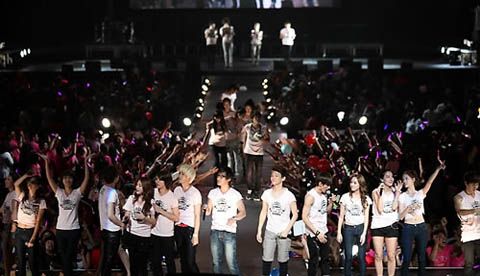 "YouTube plays an important role in attracting fans from all around the world". -A representative of SM Entertainment

A representative of SM Entertainment (hereafter refers to SM), Kim Young Min, said, "The world's famous video-sharing website, YouTube, has played the role of an engine to attract fans from all around the world".

On September 3 (hereafter indicates local time), Kim was interviewed at a restaurant located in Los Angeles and said, "SM signed a contract for providing content to YouTube last year. We built an official website within YouTube which already has an established variety of users worldwide, and people all around the world could watch the content from singers who belong to SM through the YouTube website".

Actually, many audience members and fans who participated in the "SM Town Live 2010 World Tour in LA" held at the Staples Center in Los Angeles, USA on September 4 said that they had become to know singers from SM and watch SM's content through many Internet websites such as YouTube and Facebook.

An American member of Dong Bang Shin Ki's fan club entitled Cassiopeia, Luisa Houdek (18) said, "After I watched the music videos of Dong Bang Shin Ki on YouTube, I also came to like the music of Super Junior and Shinee, who also belong to SM, as well. Every singer in SM is showcasing excellent singing and dancing, and they all look very cute. I usually enjoy listening to K-POP instead of American pop music". 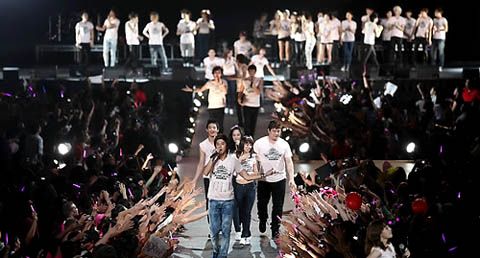 △ All the seats of SM Town Concert were occupied with spectators.

Another fan named Yosophi (18), who came from Spain via a 27-hour flight, said, "I happened to know Super Junior through the Internet". He was holding the national flag of Spain on which the name of Leeteuk, a member of Super Junior, was written in Korean.

If the quality of the content spread through the Internet had not been good enough, this kind of favorable response could not have been expected, according to SM. A person at SM explained that the high quality of content produced from the well-established system used to produce star singers by SM, which has been operating for 15 years, could be verified as high-quality content by many people abroad, many of whom have become SM fans. 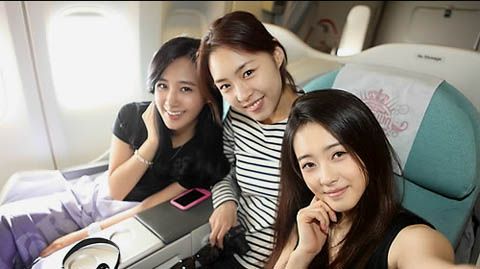 △ Kwon Yuri, Lee Yeon-hee, and Go Ara are in the chartered flight.

An American fan named Herisa (19) interviewed at the Staples Center also said, "I listened to the songs of Big Bang at first on the Internet, and now I am a huge fan of Super Junior and f(x). I like both the melodies and the lyrics of their songs". An advantage of using the Internet is that fans abroad can obtain the information on new songs from their favorite singers in real time.

Thanks to the Internet, fans of Super Junior and Shinee living in East Asian countries could sing and dance along with Super Junior and Shinee even when they first visited their country. And the Internet also established the foundation that could attract 20,000 fans to the debut showcase of Girls' Generation held in Japan. The representative of SM Japan, Nam So Young, said, "At this moment, even before the official debut of Girls' Generation, there are continuous inquiries from many music stores in Japan including Tower Record about the new album from Girls' Generation that will be released in Japan. Girls' Generation has already become famous in Japan as they have been publicized through the Internet so far, and so they are performing activities in Japan not as rookie singers, but as 'Asia's number one star girl group'".