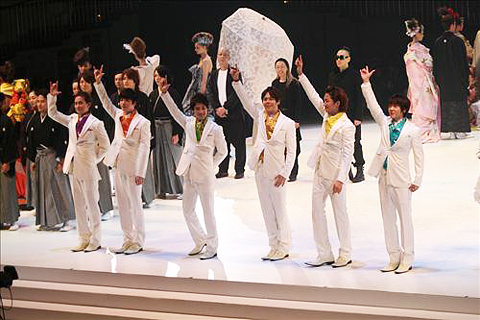 During the afternoon performance, members from the group Supernova made the opening of the show as models and then they raised the excitement by singing thier hit songs "Last Kiss" and "Shining Star" in white tuxedo. During the evening stage, members from the group Beast appeared in black tuxedo and ereptured the audience by presenting their powerful showcase while singing their hit songs such as "Special" and "Beautiful". 4 Minute members participated in both stages and walked the stage while wearing cute mini wedding dress attire specially made for them, and they also held live performance by singing their debut song in Japan entitled "Muzik" and "Why", which will be released on March 9. 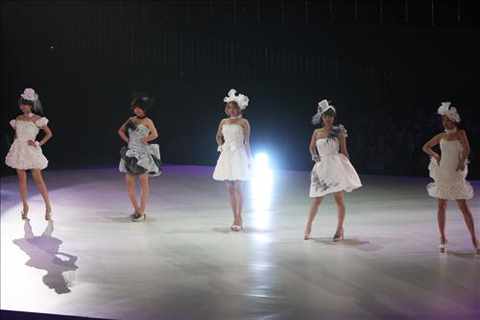 Yumi Katsura's wedding collection, which was the first wedding fashion show in Japan with its first show held in 1965, has been held in different cities in Japan such as Tokyo and Osaka, and it has been very popular as it provides new trends in fashion. This year's show was even more extravagant to commemorate its 70th showcase and the collaboration with the genius musician Ji Park, who provided beautiful and amazing music during the show and made the collection even more outstanding. Designer Yumi Katsura presented about 100 new wedding dresses during the show. 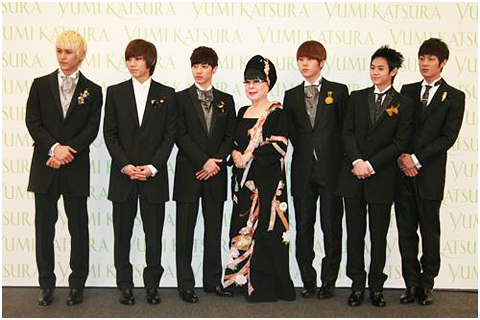 She explained the reason why she had invited K-Pop idol group members to her show at the press conference held after the afternoon show, saying, "I wanted to inform the audience about the attractiveness of fashion to teenage girls". The leader of Supernova, Jung Yoon-hak said, "This place was completely filled with enthusiasm during the show and we really want to hold our live performance here if we can have the chance". The leader of 4 Minute, Son Ji-hyun, expressed her feelings, saying, "We are all enjoying the show as if we were actually debuting as models, and we really appreciate them making pretty dresses for us". The leader of Beast, Yoon Doo-joon, said, "I really thank the organizers for inviting us to this wonderful event. As we flew here to Japan, we will present a more splendid and outstanding performance today".

"K-Pop Idols Participate in Fashion Show in Japan"
by HanCinema is licensed under a Creative Commons Attribution-Share Alike 3.0 Unported License.
Based on a work from this source