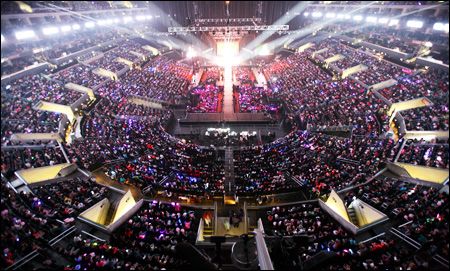 When fans waiting in line for the S.M. Town Live 2010 World Tour in front of the Staples Center, Los Angeles, looked up at the sky, they were surprised to see the banners "'Relive S.M. Town at ALLKPOP.COM" trailing from a group of airplanes, The Korea Times' sister paper Sports Hankook reported Monday.

Arranged by North American fans of a popular K-pop website, the special event this past Saturday signaled the start of the anticipated concert organized by SM Entertainment, one of the biggest pop music agencies in Korea.

More than 15,000 fans made up the audience, including Hollywood actor Jack Nicholson. Along with the vivid costumes and music offered by the singers, the stage presentation was an impressive backdrop for the equally impressive S.M. star line up. According to S.M. Entertainment, the 3D images were created by the team that worked for the hit movie "Avatar".

Fans wearing the same-colored T-shirts started singing in front of the venue, while others showed off their dance moves.

"I like Leeteuk from Super Junior. I got to know the group through the Internet and I'm not sure exactly what it is, but there is something special about him. I worked hard to earn money to come here", said a Spanish fan, who was holding a Spanish flag with the boy band members' names written on it.

The concert was scheduled to start at 7 p.m., but fans began to gather five hours before the event. Soon groups of fans got together and they started sharing information and talking about the latest news of S.M. stars, not much different from their Korean counterparts.

Upon the start of the event, fans welcomed J-min with her ballads and cheered on as the evening continued with some of the most popular groups and soloists appearing on stage.

Grace, SHINee, Trax and f(x), among others, heated up the stadium with their signature styles and melodies, while others paired up with fellow singers and actors for special collaborations.

The excitement continued as Girls' Generation and Super Junior took the spotlight and performed some of their biggest hits while running around greeting fans. 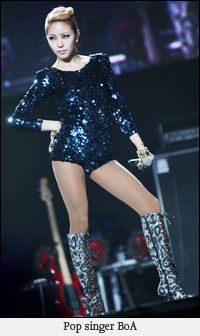 Next came S.M. Entertainment's biggest star of them all: BoA.

The singer, who released her digital single "Eat You Up" in the U.S. in 2008, started her show with one of her other hit songs "My Name", and went on with "I Did It For Love" with SHINee's Key.

The highlight was when TVXQ members Yunho and Max took to the stage to sing "Mirotic" and "Maximum".

The concert went on for four hours with 56 songs, surprising both fans and staff with colorful content and unstoppable energy. 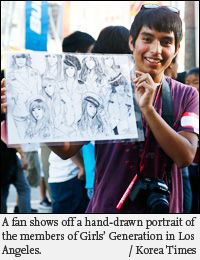 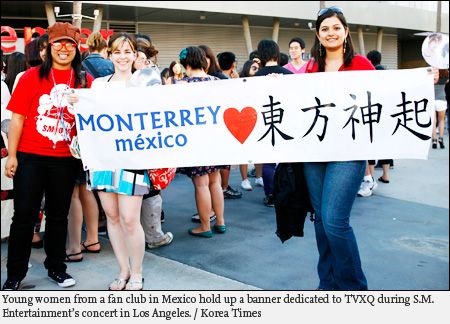 "K-pop stars kick off SM world tour in LA"
by HanCinema is licensed under a Creative Commons Attribution-Share Alike 3.0 Unported License.
Based on a work from this source