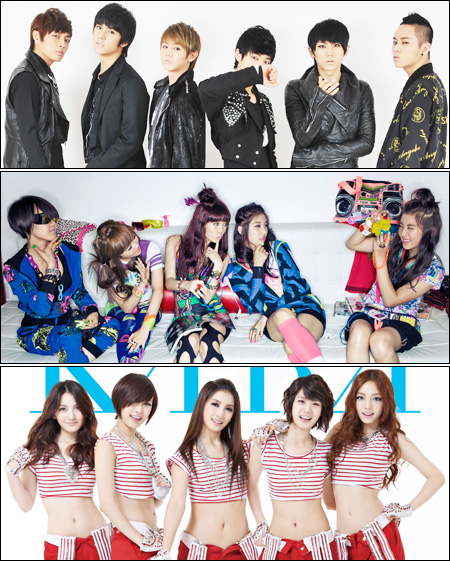 From top, Four out of six members of Beast, Hyuna from 4 Minute and Goo Ha-ra from Kara have received either special admission or scholarships from their universities. / Korea Times

Colleges often award scholarships to K-pop stars and popular entertainers as their enrollment can be valuable assets for the promotion of a schools' image.

However, many ordinary students who have to work various part-time jobs to pay tuition say the awarding of scholarships to young celebrities is unfair.

Members of prominent Korean bands such as Beast, 4 Minute and Kara have received special admissions or full scholarships from the universities they attend.

Four out of six members of Beast have been accepted to Dongshin University in South Jeolla Province with full four-year scholarships. Hyuna from 4 Minute received special admission to Konkuk University as an entertainer and Goo Ha-ra from Kara entered Sungshin Women's University under a "superb performance" scholarship.

"Our school decided to give them special scholarships because they can boost the school's image", an official from Dongshin university said. "Their wide recognition can contribute to promoting the school".

"If entertainers are receiving scholarships in entertainment-related departments in recognition of their success then I don't have much problem with it. But if these people in ordinary departments like English literature receive scholarships when they doneven attend classes, then I have a problem with it", said Rhee Hae-ri from Hankuk University of Foreign Studies. "I was in the same class with a pop star twice and I was angry that the person who didn't even come to class could receive a good grade when everyone else was working so hard for it. Wouldn't it be the same for scholarships?"

Others say awarding four-year scholarships to entertainers for whatever reason, is discriminating against other students.

"I understand that there could be a plus factor in the admissions process for being a K-pop star, but a four-year scholarship is way beyond the benefits they should be receiving", said Min Sun-hee, a graduate student. "If schools give them scholarships for being famous, they are discriminating against other students".

Schools give scholarships and acceptance letters to entertainers to increase publicity of the school. In turn, they can graduate with a degree without much pressure - a mutually beneficial agreement.

"This is a very common phenomenon", said a former worker at JYP Entertainment, one of the largest entertainment companies in Korea. "When I worked at JYP, I saw many cases where pop stars are offered scholarships and are accepted into universities without much difficulty".

Students say this is unfair.

"I'm a university student and the high tuition fee drives me crazy. Paying 4 million won every semester is not easy for people who have to earn it on their own", said a student on his personal blog. "The tuition should be the same for entertainers as well. It's just unfair to give them advantages when they already make a lot of money".

The biggest case of celebrity favoritism arose when popular actress Moon Geun-young was admitted to Sungkyunkwan University, one of the top universities in Seoul, in 2005. Moon's admission caused a stir as she was accepted through rolling admissions although she had said she would apply the regular way.