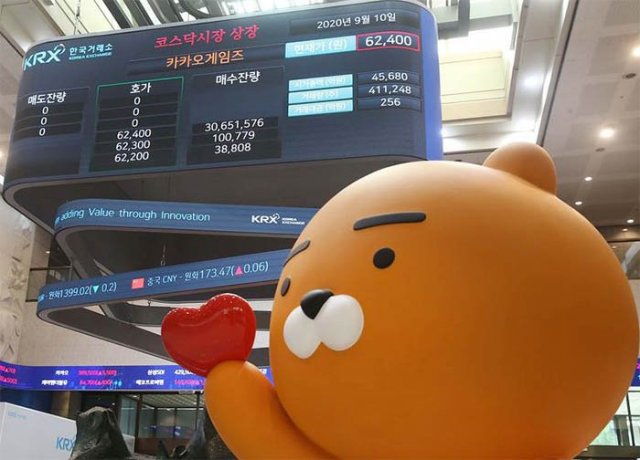 An electronic board at the Korea Exchange in Seoul shows the stock price of Kakao Games after its debut on the Kosdaq on Thursday. /Newsis

Kakao Games shares doubled in value on the day they went public on the junior Kosdaq market on Thursday and surged to their daily limit high.

But the stellar performance prompted mixed outlooks on the future direction of the stock.

The company set a new subscription record for its initial public offering with W59 trillion in deposits (US$1=W1,188). Some analysts expect the trend to last, while others worry that the stock may be overheated.

Kakao Games closed at W62,400, 2.6 times higher than its subscription price of W24,000. It opened at W48,000, double the subscription price, and surged by the daily limit of 30 percent just two minutes after the market opened.

That propelled the company's total market capitalization to W4.57 trillion to rank fifth on the junior bourse.

The game company's executives made a fortune. The value of 2.41 million shares owned by CEO Nam Goong-hoon surged to W150.5 billion.

Staff with stock options made around a W530 million profit, while other staff's stocks were valued at W40-50 million per person.

"Kakao Games Makes Stellar Debut on Stock Exchange"
by HanCinema is licensed under a Creative Commons Attribution-Share Alike 3.0 Unported License.
Based on a work from this source