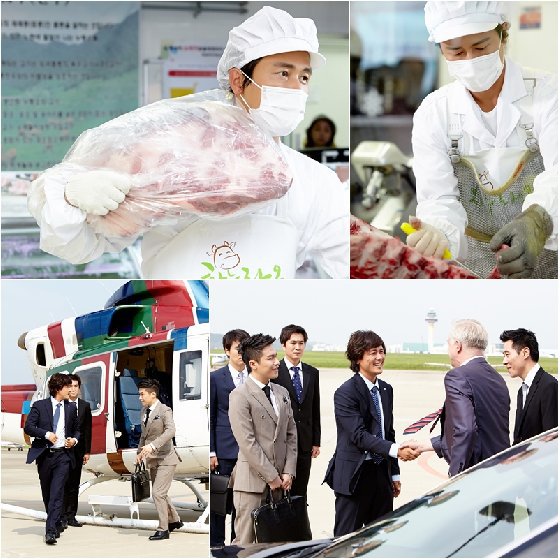 Kam Woo-sung is coming back with "My Spring Days".

Stills revealed on the 22nd show Kam Woo-sung dressed as Kang Dong-ha, the director of Hanuraon, a livestock industry.

Kang Dong-ha is a hard working businessman who made his own future as the best livestock entrepreneur. Despite the fact that he's the director, he personally tends to the meat himself and sell them.

The stills of Kam Woo-sung show him wearing his overgarment, with a big chunk of meat on his shoulder. There's another one of him in a clean suit, dealing with foreign buyers.

Kang Dong-ha lost his wife to an accident and lives with his two children. He's been keeping busy to forget about his wife and pain. Dong-ha meets Lee Bomi (Choi Soo-young), who has his wife's heart from the transplant and falls in love.

Kam Woo-sung is highly anticipated as he is a successful mellow actor.

There has been many talk about the age gap between Kam Woo-sung and Choi Soo-young. However, Kam Woo-sung is good enough to blend in well with any actress, according to the production.

"My Spring Days" is a humanly melodrama about the subject of cellular memory, in which the recipient of an organ also inherits the habits and personality of the donor. A woman gets a new life through an organ transplant and falls in love with the donor's husband and family.

"Kam Woo-sung is back with upcoming MBC drama "My Spring Days""
by HanCinema is licensed under a Creative Commons Attribution-Share Alike 3.0 Unported License.
Based on a work from this source