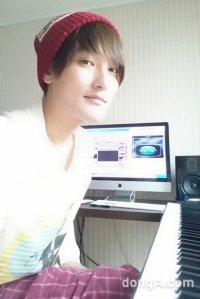 Kang Ka will be discharged from the search party battalion of the 8th Army Division in Pocheon-si, Kyeonggi-do on February 19. Then, he will kick off a series of the fan meetings at SookMyung Art Center in Cheongpa-dong, Seoul, on February 20, and will visit Beijing and Tokyo to greet his fans who showed steadfast love even during his two-year Army service.

The fan meetings will consist of various events under the theme of "The Past, Present and Future", and will also include a showcase of his pictures and videos during his army service.

According to his agency, SM Entertainment, the Seoul fan meeting will attract significant attention from domestic and Asian fans because it will be the first ceremony right after his discharge from his military service.

Since Kang Ka enlisted in the army on April 1, 2008, he was selected as an outstanding soldier and starred in "Mine", a musical created by the Army to commemorate the 60th Anniversary of the Republic of Korea.