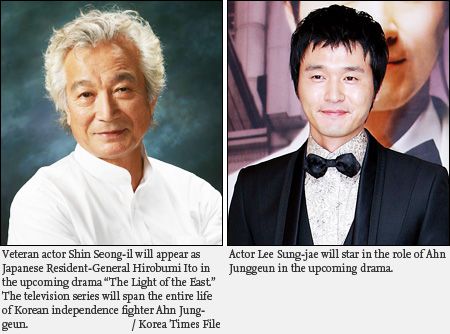 Veteran actor Kang-Shin Sung-il will appear in the television drama "The Light of the East" (working title).

The 72-year-old actor will play the first Japanese Resident-General Hirobumi Ito, who was assassinated by Korean independence fighter Ahn Jung-geun (1879-1910) at Harbin, northeastern China, according to JI Productions Friday.

It is Shin's first full-length television drama in his 48-year acting career.

"To appear in the drama, which is being made to commemorate the 100th anniversary of Ahn's death, was a historical calling. We are all expecting a vigorous schedule of shooting back and forth in Korea and China, but I hope to bring the best of my acting to the drama", Shin was quoted as saying by JI Productions.

The line up for the television series included popular movie actor Lee Sung-jae as Ahn and Chun Ho-jin as Ahn's father.

The 24-episode series "The Light of the East" will present the full life of Ahn, who struggled for Korea's independence and died in the process.

"The drama will take viewers to the past and show the lifelong struggle of our independence fighters, from their beliefs, their goals to their desires to make their dream come true amid the political and social chaos at the time", the production company said in a press release. The drama will start filming this October.

Shin, who started acting in 1960 with the movie "Romance Papa", is one of the most famous film stars here. He shot to stardom with his charismatic and romantic role in the film "The Barefooted Young" and made headlines when he married his co-star and the heroine of the film, Um Aing-ran. In 2000, he ran for political office for the Grand National Park and was elected but was sent to prison for bribery in 2005. He was released by a special pardon in 2007.