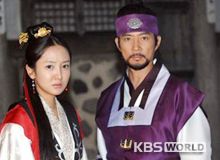 KBS's "Korean Ghost Stories - 2008 - The Curse of the Sajin Sword" was awarded gold in the category for TV and film during a ceremony held at American Airlines Theatre in Manhattan on Monday.

New York Festivals is one of the most well-known International Awards Group (IAG) companies.

The selection marks the first time for "Ghost Stories" to receive an international award.