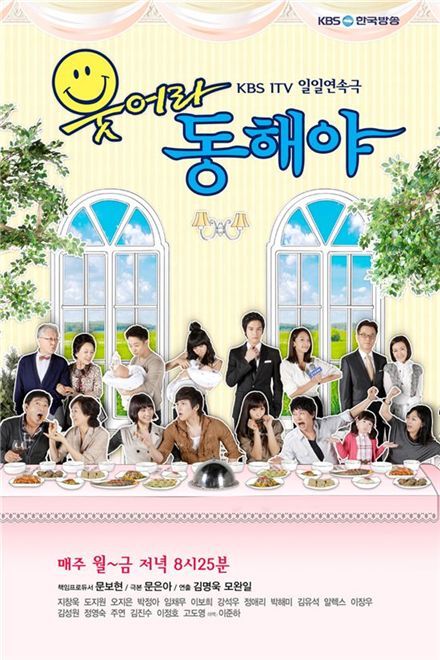 KBS' weekday drama "Smile, Dong-hae" came in first on the weekly TV chart during the final week of the year 2010.

According to Total Multimedia National Research (TNmS) from December 27 to January 2, KBS' series "Smile, Dong-hae" took first place on the survey after scoring an average viewership rating of 26.3 percent, rising by three steps from the previous week.

"Smile, Dong-hae", a family drama starring Ji Chang-wook, Do Ji-won and Oh Ji-eun, is about the life and love of a young Korean-American short track speed skater.

Next on the chart was SBS romantic series "Secret Garden" which scored an average rating of 23.4 percent, the figure about a two percent drop from the week before although its ranking has risen from third to second place.

Starring Hyun Bin and Ha Ji-won, "Secret Garden" is about the love between rich, arrogant department store owner and a penniless stunt woman who switches souls.

KBS' variety show "Happy Sunday" came in third with a viewership rating of 19.4 percent, maintaining its reputation as the nation's most-watched entertainment show. 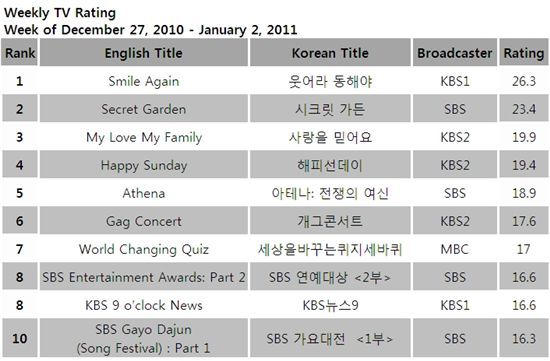 "KBS "Smile, Dong-hae" reaches top on weekly TV chart "
by HanCinema is licensed under a Creative Commons Attribution-Share Alike 3.0 Unported License.
Based on a work from this source