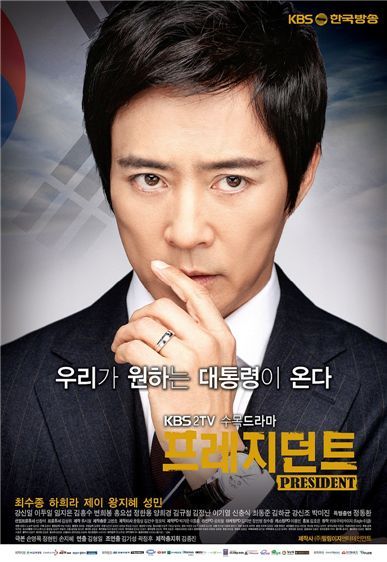 KBS' series "President" was the only Wednesdays and Thursdays prime time drama that went on air this week with the other two public broadcasters featuring year-end ceremonies in the same time slot.

"President", which aired both of its episodes on Wednesday, posted an average viewership rating of 7.8 percent on a survey by Total National Media Research (TNmS) and 9.9 percent on AGB Nielsen Media Research's poll, both figures significantly improved from last week's 4.6 percent and 4.9 percent, respectively.

Starring Choi Soo-jong, Ha Hee-ra and TRAX's "JayÉ, the show depicts on the process of ambitious lawmaker Jang Il-joon (Choi) trying to become a president through a various efforts of himself and the people surrounding him including his family and staff members.

This week's episode showed how presidential candidate Jang successfully persuaded the floor leader of the ruling party Goh Sang-ryul (Byun Hee-bong) to be his supporter for the election, wisely overcoming the trap set up for him.

KBS on Thursday aired its year-end K-pop show "KBS Gayo Festival" in its time slot while SBS and MBC ran and held their year-end singing and acting award ceremonies.

"KBS TV series "PRESIDENT" posts higher ratings"
by HanCinema is licensed under a Creative Commons Attribution-Share Alike 3.0 Unported License.
Based on a work from this source