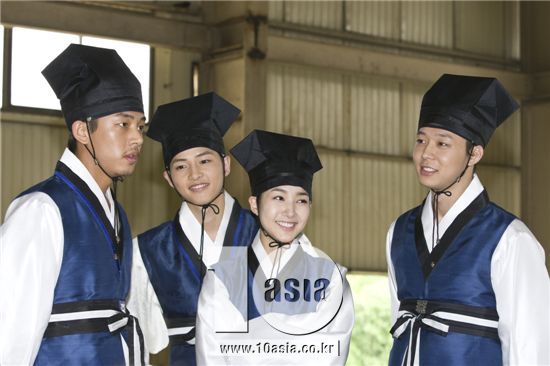 The atmosphere at the press conference for KBS TV series "Sungkyunkwan Scandal", held July 15 on the set in Hwaseong city, Gyeonggi Province, was unusually warm and it was not just because of the beautiful faces of actors Park Yoo-chun, Song Joong-ki, Yoo Ah-in and Park Min-young. When Park Yoo-chun would pour out ridiculously humorous comments, such as "bed scene with just the bed" or "Sungkyunkwan Sweat-candal", Song Joong-ki, who was sitting next to him, would subtly provoke him by saying, "If you send me the questions for Park Yoo-chun, I will translate his answers for you in the future". On top of this, Park Min-young, who remarked "When the director saw Park Yoo-chun's body, he asked if TVXQ didn't have to work out", and Yoo Ah-in, who says he was "relieved when he saw Park Yoo-chun's body", try to pit one against Micky as well. Then they say, "We love Park Yoo-chun" and make him unable to say or do anything. "Sungkyunkwan Scandal" is a historical romance drama, based on the popular novel 'The Days of Confucian Scholars at Sungkyunkwan", about the female-disguised-as-male scholar Kim Yoon-hee (played by Park Min-young), the perfect man Lee Seon-joon (Park Yoo-chun), the suave guy Goo Yong-ha (Song Joong-ki) and the animalistic boy Moon Jae-shin (Yoo Ah-in). Below is the conversation between four actors who, even prior to the show's airing, are showing a strong bond amongst themselves, one that is as solid as their characters who are called 'The Jeulgeum Foursome'. 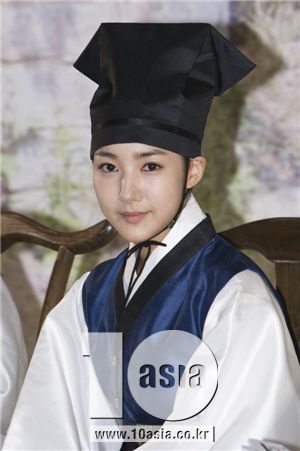 Q: Could you each introduce your characters?
Park Yoo-chun (Micky): First of all, I am glad to take on my first acting challenge through "Sungkyunkwan Scandal". From a third-person perspective, my character Ga-rang Lee Seon-joon is an extremely stiff, cold, indifferent and cold-blooded person. But he does have a humane side to him. And it is appealing how he worked so hard to make a name for himself without the help of his remarkable father.
Song Joong-ki (Song): I play Yeo-rim Goo Yong-ha in "Sungkyunkwan Scandal". The pen name Yeo-rim is made up of Chinese characters 'yeo', which stands for female, and 'rim' which means the woods. That is how much the character is into women and booze, and he is very good with them. I wouldn't have been attracted to the character if that was all there is to him, but there is a different side to him. What impressed me was that he hides the sadness in his heart and pretends to be happy on the outside.
Park Min-young (Park): Kim Yoon-hee is a character who has an insatiable desire to learn but cannot achieve her dream because of her handicap, being a woman living in the Chosun Dynasty period. Then, by chance, she gets to enter Sungkyunkwan in place of her brother. There she meets all these great men, experiences love and friendship, and starts having grand dreams.
Yoo Ah-in (Yu): Gul-oh Moon Jae-shin would be, what we call nowadays, a wild guy or animalistic guy. But when he meets good friends at Sungkyunkwan, he gradually starts changing and grows up.

Q: Park Yoo-chun, this is your first public appearance and your first acting challenge since TVXQ announced that it would cease to work as a group. How have you been doing since and what made you take on acting?
Park Yoo-chun: I expected that this question would come up. When there was no activities to carry out as TVXQ, I lived an incredibly normal life. I studied music and practiced acting a lot. I went to see movies like other people do and spent a lot of time with my family, whom I hadn't spent much time with because of work. And I had been working as a singer all these years so I always had this image as 'Park Yoo-chun' but through acting, I could become several different people. That was extremely appealing to me.

Q: Did Hero Jaejung or Kimi Hyun-joong give you a lot of advice since they had already debuted as actors?
Park Yoo-chun: I usually don't talk about uncomfortable things when I meet Hyun-joong. Jaejung didn't so much give advice but he helped me feel comfortable around this particular time, which is a big turning point in my life. Oh, I told him I was going to the set today and he said, "Go and die". (laugh) 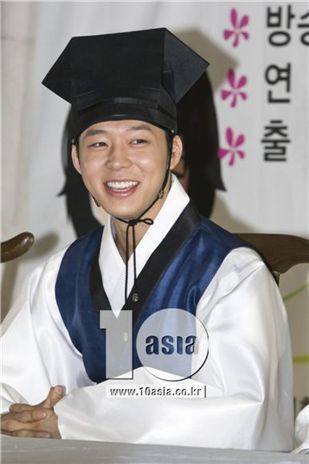 Q: It must not be easy playing the perfect man Seon-joon.
Park Yoo-chun: It is not hard at all. I have been wanting to live the good-boy life but I was busy working.. I am sorry. (laugh) This is my first dramatic role so it's not so much difficult but there are many new things that I am learning. I think hard and work hard in order to approach the character Seon-joon. I try to imagine various background information about him that were not all revealed in the original story. For example, how did he get so good at archery and why does he work so hard in everything? Sometimes I even write a diary from Lee Seon-joon's perspective before I go to sleep. When I eat at home these days, I never start eating until my mother picks up her spoon. Because Seon-joon is a well-mannered young man. (laugh)
Song Joon-ki: Mister Yoochun, you are not supposed to lie when answering a question. You have to tell the truth, right?
Park Yoo-chun: It is the truth!

Q: Then Song Joong-ki, what kind of person do you think Park Yoo-chun is?
Song Joon-ki: I am learning a lot from Mister Yoochun in order to create my character Yong-ha. The director said that if I played Yeo-rim the way Mister Yoochun lives his life, I would no doubt win the grand prize in acting. (Looking over at Park Yoo-chun) What, you didn't think I would talk about this? I came here determined to talk about this. (laugh)
Yoo Ah-in: In Micky's defense, Joong-ki is no pushover. (laugh)
Park Min-young: I think Yong-ha is similar to Joong-ki in real life. Hahahaha. There is a scene in the show where Yong-ha is practically living at the gisaengs' place and there was a big fuss in the editing room. That the actor and the character matched up the best.
Song Joon-ki: I forgot to say this a little while ago, but I personally love Park Yoo-chun. (laugh) Of course, I am only saying this because of the TVXQ fans.

Q: I heard that Park Yoo-chun is trying to be Seon-joon in his everyday life. How are Song Joong-ki and Yoo Ah-in each approaching their characters?
Yoo Ah-in: Everybody thinks that I have this pretty boy-ish image but, in fact, I have never played such [pretty boy] role. In my previous works, I played unconventional roles like an orphan, a crazy-and-weird boy and a boxer. Jae-shin, in particular, is the most uncommon character. He is extremely tough and unrealistically macho. There are some parts [about the character] that are hard for me to take in, so I am often sorting them out with the director as I work.
Song Joon-ki: In my case, I think I have always played characters who are bright, clean and nice except in the film "A Frozen Flower". I sometimes mentioned in my previous interviews that I wanted to play a character who had two different sides, and am truly grateful that I get to play this character. Yong-ha is similar to the real me, but I am not saying that we are alike in how we are good at drinking and seducing women. I am incredibly cheerful most of the time, but contrary to how I look I do have some strong aspects inside. And these aspects much resemble Yong-ha. On the outside, Yong-ha looks mellow, happy and enjoys the arts but he reveals a masculine side and composure underneath that appearance. 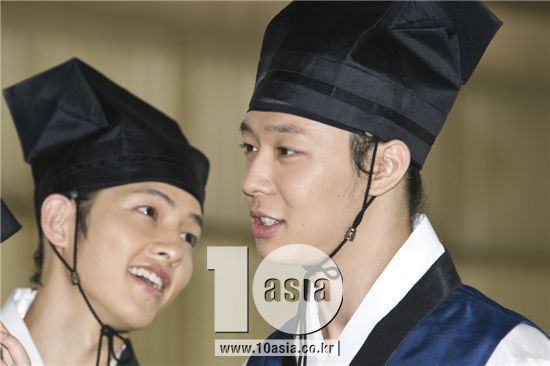 From left, actor Song Joong-ki and singer and actor Park Yoo-chun attend a press conference for upcoming KBS TV series "Sungkyunkwan Scandal" held at the show's set in the city of Hwaseong in Gyeonggi Province, South Korea on July 15, 2010.