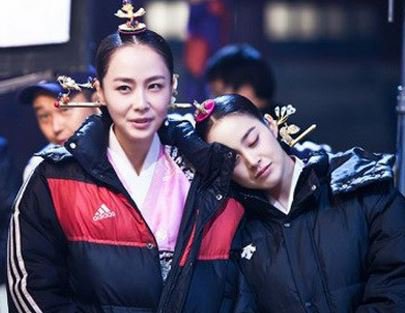 The two starred in the SBS drama "Jang Ok-jeong" in the past as enemies but in real life, they are good friends.

"Jang Ok-jeong" starred these two actresses as Jang Ok-jeong and Queen In Hyeon who fought over Sook-jong (Yoo Ah-in) but in real life they were best friends. They are only a year apart from each other and the drama strengthened their bond.

"KeyEast artist Hong Soo-hyun takes picture with Kim Tae-hee on her shoulder"
by HanCinema is licensed under a Creative Commons Attribution-Share Alike 3.0 Unported License.
Based on a work from this source