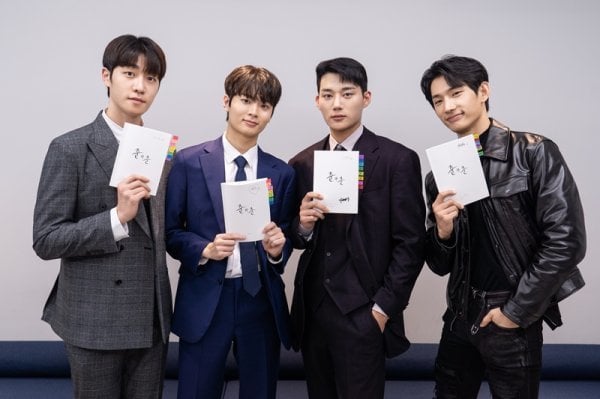 W Story, which produced the BL web drama "Cherry Blossoms After Winter", will start filming "Jun and Jun" with the goal of airing in the first half of next year.

"Jun and Jun" is an office romantic comedy between Lee Jun, an idol-turned intern, and Choi Jun, a fluttering genius director. Actors Ki Hyun-woo and Yang Jun-mo were cast as head of the headquarters and interns. On top of that, Park Hyeong-seop and Cho Chan-hyun joined and conducted the entire script reading on the 11th.

"Jun and Jun" is the first work developed by W Story as an original work and attempted to develop a one-IP multi-development with web novels, web dramas, and webtoons. In addition, the production team, including directors and writers, will be formed into the MZ generation, raising expectations for the new sense and performance of the generation that will lead the domestic BL drama market in the future.

W Story, Korea's first BL web drama production company, said, ""Jun and Jun" is an original IP, and we want to challenge various possibilities. In addition, we cast new actors who can perform infinite roles as the main characters, and we are making full preparations by building friendships even before filming so that we can understand and express the BL worldview".

"Jun and Jun" is planning to air simultaneously around the world in the spring of 2023, and web novels and webtoons will also be released later.