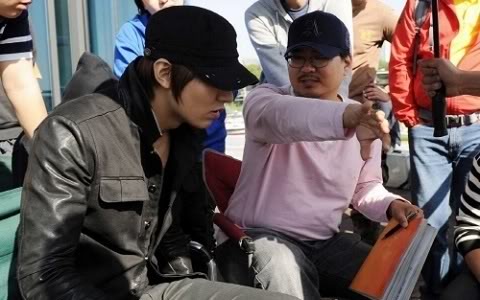 K-drama fans who want more insight into what goes on behind the scenes of their favorite shows should check out a new audio podcast called K Drama Insider (© Diane Hope 2014). The show plans to bring you news and in-depth interviews with top Korean actors, drama directors, writers and crew. Episode One 'Location Location Location' looks at some of the most popular places to film dramas - with an 'On the K Spot' report from the cafe where Coffee Prince was made. It also features an exclusive interview with director Jin Hyeok ("City Hunter", "Doctor Stranger", "Master's Sun", "Shining Inheritance" and "Prosecutor Princess"), in which he talks about some of his favorite spots for location work, the source of his inspiration for Doctor Stranger, what kind of drama he'd most like to make in the future ... and which actors he'd most like to work with on his next project. There's also a fun feature all about the pavement street cafes or 'pojangmacha' seen in so many of the dramas. A key aspect of the show will be Korean to English voice translation ... so no need to read subtitles!

Airing once a month and around 30 minutes long, each show will be arranged around a popular theme from K-dramas relating directly to a specific aspect of Korean life style, culture or history. So you'll not only learn more about all things K-drama … you'll get lots of fun and fascinating insights into real life in Korea. The show's creator, Diane Hope, plans to record a lot of the material on location in Seoul and other parts of South Korea. So with K Drama Insider you'll get loads of insider information that you just can't get anywhere else … hence the name. The project is currently inviting fans and corporate sponsors to participate in a crowd-funding campaign on Kickstarter.com and rewards for pledges of support include a personalized cell phone ringtone voiced by the show's next drama actor guest, as well as a chance to participate in the interview.

To find out more about the project visit: https://www.kickstarter.com/projects/385319600/k-drama-insider-podcast.

"[Kickstarter] K Drama Insider"
by HanCinema is licensed under a Creative Commons Attribution-Share Alike 3.0 Unported License.
Based on a work from this source