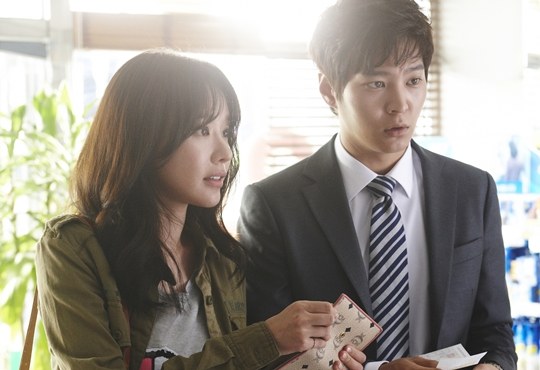 Kim Ah-joong and Joo Won have come together.

The casting of Kim Ah-joong and Joo Won was a big issue for fans from the beginning. "Only You - 2013" is about Lee Ho-tae (Joo Won) who meets the first love of his dreams, Yoon Jin-sook (Kim Ah-joong) for the first time in ten years but is shocked to find out she's a hit-and-runner.

The still cut is from the scene where Yoon Jin-sook is being taken to the police station after an accident but stops by a pharmacy to get pills for her who is sick.

Kim Ah-joong said, "I like the character of Yoon Jin-sook as she is unpredictable. I think it's going to be a fun and cheery movie". Joo Won said, "We started filming early in the morning when the weather was nice. The movie is fun and I think I'll have fun throughout the filming".

"Kim Ah-joong and Joo Won on site for "Only You - 2013""
by HanCinema is licensed under a Creative Commons Attribution-Share Alike 3.0 Unported License.
Based on a work from this source