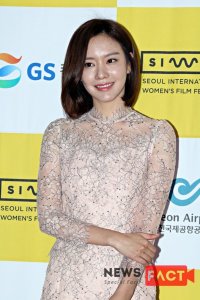 Actress Kim Ah-joong has proved that her name, meaning "the center of the world", is true in Vietnam.

She has received overwhelming fanfare and media attention while visiting the Southeast Asian country as part of a cultural delegation for the 2007 Dynamic Korea Cinema Festival, which is running from May 31 to June 3 to celebrate the 15th year of Korea-Vietnam diplomatic relations.

Kim's management agency says the local media has been covering her story in the top headlines and airs a ten minute segment on her whereabouts in a prime time slot every day.

The hype is also apparent at autograph events. Some 1,000 fans flocked to an autograph session at a Ho Chi Minh department store.

The promotion of Kim's hit film '200 Pounds Beauty' has established her status as a Hallyu star to the Vietnamese people.