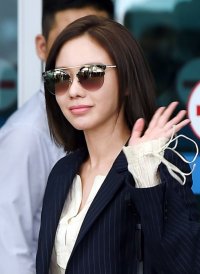 Actress Kim Ah-joong has risen to celebrity status through her lead role in Korean comedy "200 Pounds Beauty". After a successful run in Singapore last April that made it the top Korean record-holder in that region, the film is scheduled to open on 20 screens in Hong Kong on May 17th.

Some four initial previews of the film in Hong Kong helped fuel the celebrity treatment actress KIM has been receiving since her arrival there May 12th. She was greeted at the airport by throngs of adoring fans. During her 5-day stay in Hong Kong, KIM was interviewed by nearly 150 news outlets in both individual and group press-publicity sessions.

The actress has received several offers for roles by Hong Kong film companies, according to her management agency, Yedang Entertainment Company. A joint Korea  Hong Kong project is also under negotiation but details remain undisclosed.

Coverage in the Chinese local media favors KIM as likely to surpass the fame of Jun Ji-hyun, the heroine of "My Sassy Girl", which was enormously popular in Hong Kong several years ago. KIM excels in her dual role as the extremely obese Han-na, whose full-bodied plastic-surgery transforms her into a dazzling but sweet and wholesome pop sensation. The pop numbers, which KIM sung herself, add to the film's popularity and raised the actress' profile for her versatile talent.

"200 Pounds Beauty" is based on a best-selling Japanese comic book series and is directed by Kim Yong-hwa. It was produced by KM Culture, who are also handling the film's international sales.

"KIM Ah-joong Hot in Hong Kong"
by HanCinema is licensed under a Creative Commons Attribution-Share Alike 3.0 Unported License.
Based on a work from this source