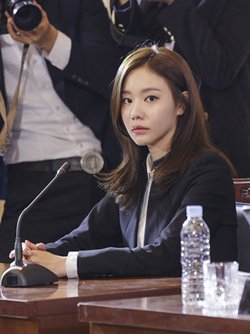 Actress Kim Ah-joong will return to TV for the first time in four years as a prosecutor with a strong sense of justice in SBS' new legal drama "Punch - Drama".

Kim is reportedly full of enthusiasm for the new drama, and is diligently studying her character.

Kim's management agency Namoo Actors said, "Kim is a versatile actress and is capable of doing a wide range of roles in a variety of genres not just romantic comedy".

The show deals with the power struggle between prosecutors who want to bring justice to light and those who try to use their power for their own interests.

It will start airing next Monday.

"Kim Ah-joong Returns to TV in Legal Drama"
by HanCinema is licensed under a Creative Commons Attribution-Share Alike 3.0 Unported License.
Based on a work from this source