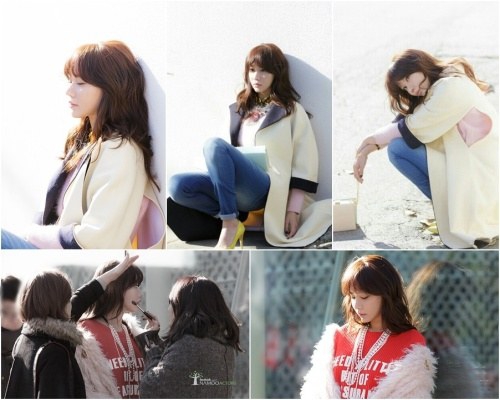 She modeled for the issue of fashion magazine "Grazia" taken in the streets of Itaewon. She was seen in jeans and a T-shirt which brought out the cuteness that was always hidden behind sexiness. She's either sitting on the streets or surrounded by staff.

Difficulties were expected due to the windy weather but she didn't care about the cold and posed with all her passion.

Meanwhile, Kim Ah-joong stars in the movie "Catch Me" with Joo Won, the profiler as his first love and legendary thief Yoon Jin-sook. To be released this 18th.

"Kim Ah-joong's photo shoot behind cut"
by HanCinema is licensed under a Creative Commons Attribution-Share Alike 3.0 Unported License.
Based on a work from this source