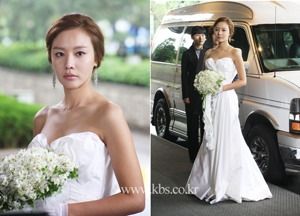 Kim Ah-joong has wowed viewers by displaying yet more of her charm by wearing a wedding dress. She has been getting the chance to display all her charms as star actress Han Ji-soo in the drama "The Accidental Couple".

The latest episodes showed how Han Ji-soo and Gu Dong-baek (played by Hwang Jung-min) came to arrange a wedding under a contract. Viewers were put on edge as some incidents made them wonder if Ji-soo would ever be able to arrive at the wedding, where Dong-baek was waiting for her in a tuxedo.

A drama staffer, seeing Kim reveal her pure beauty in a simple wedding dress, said, "It is not easy to look sexy as well as elegant in a wedding dress, but that is exactly how Kim looked, and she impressed everybody at the shooting location. The simplicity of the dress seems to highlight her charm better".

The KBS2 drama is aired on Wednesdays and Thursdays at 9:55 p.m.