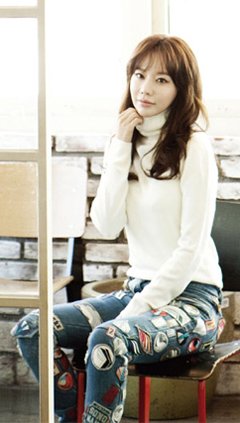 Although it has a different target audience, many critics assumed it would be overshadowed by the two higher-profile flicks. But leading actress Kim Ah-joong has helped raise its stature and drum up box-office receipts with her strong performance and good looks.

When asked to reveal her secret to keeping in shape, she said, "I work out hard and often go on a diet for one or two months before shooting a film. During production, I always try to eat well to maintain my strength and keep fit".

The film deals with the story of an elite cop, played by Joo Won, and the wily thief he is pursuing. Kim, who has already starred in several romantic comedies, said her thoughts about love and relationships have matured along with her acting career.

"It's a shame that I only experience the feeling of love through the characters I play", she said. "These days, it's hard to meet someone special, and there's no man in my life right now".

"As I have worked with many male actors, my thoughts about love have changed quite a bit. I want to meet a man who I have a lot in common with. I want someone who is like a friend, who I can watch a movie with and enjoy talking about it for hours afterwards", said Kim.

Asked if she is interested in working in different genres, she said, "Each movie has its own characters and story. There's no reason to reject a romantic comedy just because I have already worked on similar projects before. But I would like to try my hand at a human drama, melodrama, or even a thriller. After playing a mysterious thief in this movie, I think I could try the role of a villain or something more suspenseful".

Kim said she hopes to increase her filmography by her mid-30s while also stepping across genres.

"Kim Ah-joong Steals Audiences' Hearts in New Romantic Comedy"
by HanCinema is licensed under a Creative Commons Attribution-Share Alike 3.0 Unported License.
Based on a work from this source