Kim Ah-joong, the best star that a matchmaking program produced 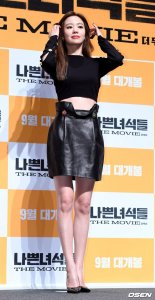 Matchmaking programs are famous for being the birthplace of many stars. Entertainer hopefuls catch the eyes of viewers and management companies as they work with other stars and reveal their talents.

There are many stars who have used programs such as KBS "War of Roses", MBC "Kang Ho-dong's ChunSengYunBun", and SBS "X-Man" as stepping stones to debut as actors.

We picked the best five stars that matchmaking programs produced

She charmed the male stars, such as Rain, Hyun Bin, Suh Kyung-suk, and Yoon Jeong-soo, with her foreign looks and her intelligence. She became a couple with Rain and the center of attention. She also appeared in "Emperor of The Sea", "Bizarre Bunch", and "200 Pounds Beauty".

Elegant and quite Yoon Jung-hee-I doesn't seem to fit well with game shows, but she is also from a matchmaking program.

She drew attention in 2002 KBS "War of Roses" as she melted the worries of Shinhwa's Lee Min-woo. Yoon Jung-hee-I competed with Im Sung-eon, Kim Bin-woo, and Choi Ha-na.

Seo Ji-hye is one that overcame humiliation in matchmaking programs. Although she was in the second season of "War of Roses" in 2003, she didn't survive long.

But she left a lasting impression, and became the leading role for "Voice Letter" and MBC "Shin Don". She rose to stardom, and many male stars who ignored her then regret it now.

Through matchmaking programs, Jeon Hye-bin showed the charm that she couldn't show as a singer. And she became a 'thunder star'.

In 2003, she captured all the love of the men in MBC "Kang Ho-dong's ChunSengYunBun" when she kept turning in her dances. At that time, she received the nickname of "Lee Sa-don", which implies that she spins for 24 hours.

On Joo-wan is the only male star that a matchmaking program produced. The stage was "War of Roses". It had changed its format for regular men to meet female stars, and On Joo-wan drew attention.

He was small and normal-looking and was always expected to be dropped first, but he survived with his unique wit and confidence.

"Kim Ah-joong, the best star that a matchmaking program produced"
by HanCinema is licensed under a Creative Commons Attribution-Share Alike 3.0 Unported License.
Based on a work from this source