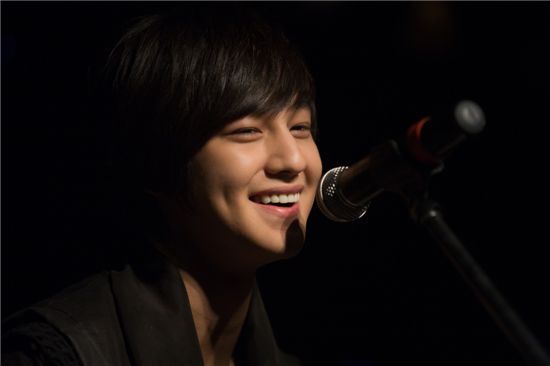 Several Korean stars including actors Kim Beom and Yoon Sang-hyun have been appointed PR ambassadors for the upcoming Hallyu Dream Festival to be held next month in the city of Gyeong-ju in North Gyeongsang Province, South Korea.

The event's organizing committee announced in a press release on Monday that they have named Kim Beom as the publicity ambassador for the festival while giving the same title to actor Yoon Sang-hyun, idol group Choshinsung and singer Hong Jin-young to promote North Gyeongsang Province.

The festival will be held September 10 to 12 as part of celebrating the "2010-2012 Visit Korea Year" campaign by Korea Tourism Organization (KTO).

The four stars will be attending the appointment ceremony, to be held August 5 at KTO's T2 Academy.

Kim, 21, rose to stardom throughout Asia after appearing in the smash hit TV series "Boys Over Flower" (KBS, 2009) with Lee Min-ho and Ku Hye-sun. He will be promoting the significance of the Hallyu Dream Festival around the world and taking part in the PR campaign aimed at attracting foreign visitors to Korea.

Yoon, 37, gained popularity after starring alongside actress Kim Nam-joo in the hit drama "My Wife is a Superwoman" (MBC, 2009) and followed it up with "My Fair Lady" (KBS2, 2009), which co-starred Yoon Eun-hye.

Choshinsung is a six-man band consisting of members Jung Jung Yoon-hak, Kim Sungje, Yoon Yoon Sungmo, Kim Kwangsoo, Song Jihyuk and Gunil. After making their debut in Korea in October 2007 with the album "The Beautiful Stardust", they went on to release a mini-album in Korea plus two studio albums and seven singles in Japan.

Hong, 24, is a trot singer who made her debut with the single album "Booming SWANS!" in 2007. She rose to fame last year after the success of the single "Battery of Love".

The Hallyu Dream Festival will feature various activities during its three-day run;
- On September 10, Kim, Yoon and actor Uhm Tae-woong will hold an autograph signing session and a mini-concert for the "Meet with Hallyu Star" event.
- On September 11, Choshinsung will perform on stage while prominent hanbok designer Lee Young-hee will hold a fashion show.
- On September 12, numerous Korean pop stars will be performing at the Hallyu Dream Concert including 2AM, 2PM, 4minute, After School, BEAST, Davichi, FT Island, Kangta, miss A, Son Dam-bi, Super Junior and T-ara.

Further details about the festival are available on their official website (www.hallyudreamfestival.or.kr).