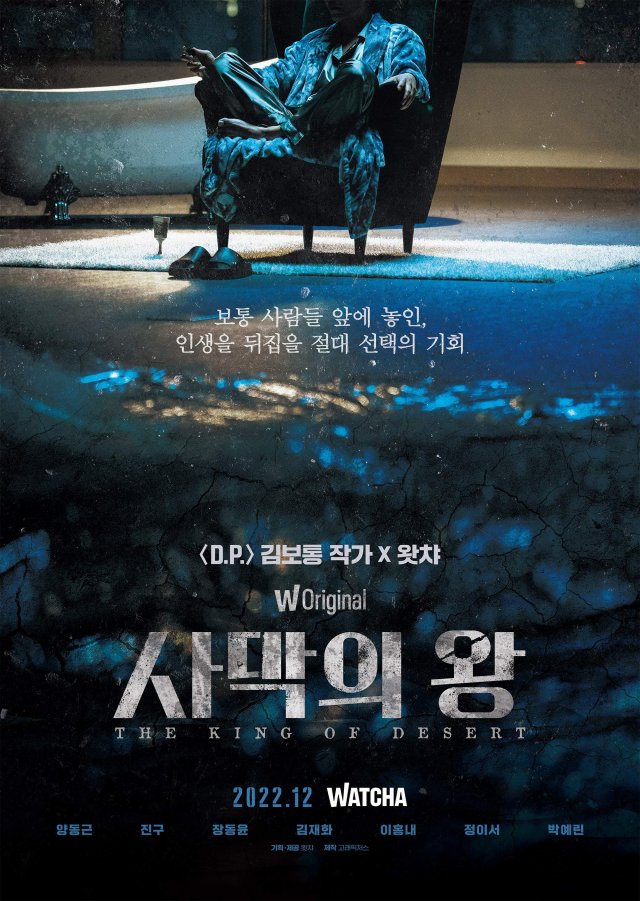 The original Watcha series "King of the Desert", written by Kim Bo-tong, confirmed its release on December 16th and released teaser posters and trailers on December 23rd.

In the teaser poster released, the boss (Jin Goo) sitting alone with a knife in the office where the bathtub is placed catches the eye. The teaser trailer draws attention to the situation of characters who cannot let go of their tension for a moment. The trailer, which begins with Jin Goo's narration, "People are always in front of choices, whether big or small", raises tension by showing ordinary people facing absolute choices to reverse their lives. The pictures of Dong-hyeon (Yang Dong-geun) and his daughter Seo-eun (Park Ye-rin), who are about to die, Cheon Woong (Jang Dong-yoon), a police-assisted YouTuber Hyeon-sook (Kim Jae-hwa), a car hijacker Hae-il (Lee Hong-nae), and a lethargic new employee Gi-joo (Jung Yi-seo) raises curiosity.

Along with the release of the new month's Watcha series "The King of Desert", the webtoon of the same name by Kim Jung-joon will also be serialized through the Watcha webtoon platform. Watcha also started webtoon services on the 13th of last month and expanded to content platforms as well as existing online video services (OTT). Through this project, Watcha will launch an element multi-use strategy in earnest that uses one IP (IP and intellectual property rights) as multiple media.